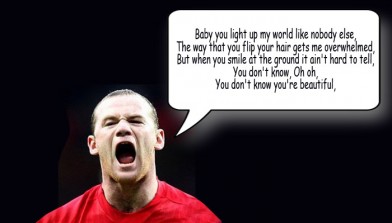 Wayne Rooney has reportedly asked One Direction to perform at his son Kai’s upcoming birthday party.

The Manchester United star often sings ‘What Makes You Beautiful’ to make his son laugh.

A source told the Daily Star newspaper: ‘He wants them to perform a few hits in the back garden at their mansion in Prestbury, Cheshire.
‘Wayne’s particularly keen to hear them sing ‘What Makes You Beautiful’, a song he often sings to Kai to make him laugh.
‘He’s so keen he’s even using some of his famous connections in the hope that it will persuade Harry Styles and the rest of the lads to make an appearance.’

This follows The Wanted’s performance at Romeo Beckham’s birthday party in Los Angeles after his mother Victoria approached them.
A source said: ‘Victoria has some handy connections with the band and it wasn’t hard to get them along.’