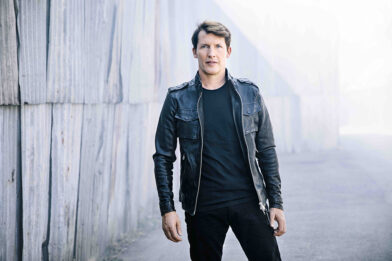 James Blunt delivers more magic with the release of his stellar new song ‘Love Under Pressure’ – one of four new tracks taken from his forthcoming greatest hits album, ‘The Stars Beneath My Feet (2004-2021)’ – out November 19th on Atlantic Records.

Written with Jack Savoretti, and produced by LA songwriting duo Afterhrs (One Direction, Maroon 5). ‘Love Under Pressure’ is James at his finest – featuring an infectious piano-driven hook from the start, a powerful vocal performance and a hypnotic beat fit for any dancefloor. Listen here.

James reflects; ‘Earlier this year during lockdown, I was lucky enough to have a Zoom writing session with the very talented Jack Savoretti. We had never worked together before, but our managers thought it might be a good idea to get us together to do some writing. I’m very pleased we did. Not only is Jack a great guy, but we wrote a banger of a single!”

Amongst the string of hit singles, ‘The Stars Beneath My Feet (2004-2021)’ will include four new songs (‘Love Under Pressure’, ‘Unstoppable’, ‘Adrenaline’ & ‘I Came For Love’), as well as four exclusive live performances from around the world, including the Glastonbury Festival. It also features stunning tracks from his latest Gold-selling album ‘Once Upon A Mind’, including ‘Cold’, and the heartbreaking ballad for his father, ‘Monster’.

James’ classic 2004 debut album ‘Back To Bedlam’, was recently named as one of the top ten best selling albums of that decade, and with ‘Once Upon A Mind’, James Blunt reinforced his reputation for writing honest, emotional songs that people can easily relate to. The album marked a return to what James Blunt does best – writing classic songs that touch both the heart and the head. Another side of James – his wit and charm – have in recent times been showcased via his always engaging Twitter account.