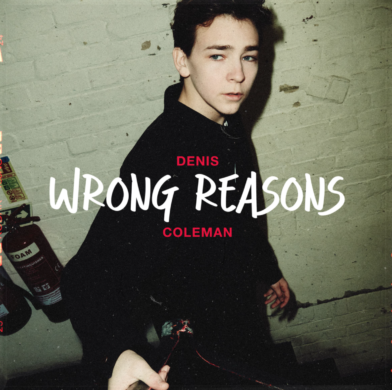 After kicking off 2021 with ‘Tangerine’ last month – the first taste of his new music this year – the rising pop trailblazer Denis Coleman, today shares his new single ‘Wrong Reasons’ out now via AWAL. Along with his previous single, this latest offering showcases a fresh sound and serves as the perfect re-introduction to Denis and his new musical era. Listen Below!

‘Wrong Reasons’ is an upbeat and infectious pop track, fusing energetic guitar riffs with hard-hitting pop beats, to accompany Denis’ smooth and charismatic vocals. Written by Denis, the lyrics explore the complexities of loving someone for the ‘Wrong Reasons’ yet still pursuing the feeling because the excitement is worth the risk.

Speaking about the single, Denis explains: “These days, so many of us wish to inject our somnambulant lives with adrenaline, with a touch of the manic, the passionate, the absurd – even if that means we crash and burn in the process. I’ve certainly felt the need for wild escapism – and sometimes we need “someone” in order to experience it. Wrong Reasons focuses on that “someone,” whose electrifying and attractive exterior hides a much more devious and dangerous true self. Wrong Reasons is a cry for colour in a monochromatic world, a twisted love letter not just to Romance, but to the beautiful risk we call life”

At only 18-years-old, Denis Coleman has already begun to establish himself as a serious contender in music. He began his musical journey when he was 6 years old after he picked up the violin for the first time and didn’t put it down again. Two years later, he developed a flair for writing music and lyrics and composing music at the world-leading conservatoire, London’s Royal College of Music (RCM). He continued to develop his craft and his hard work paid off when one of his compositions was selected to be played at London’s iconic venue, The Royal Albert Hall for the BBC Proms.

His transition into pop music started in his early teens when he won the Open Mic UK Future Music Songwriting Competition with a self-written pop song. Since then, Denis’ pop career has seen impressive milestones, where he boasts supporting credits for the tours and shows of artists including The Vamps, New Hope Club, Why Don’t We and most recently, HRVY’s Global Live Stream at The Royal Albert Hall. He has also released a collection of singles over the years with his 2020 remixed single ‘Make Friends (R3HAB Remix) ’ garnering 1.9 Million Spotify streams and counting, as well as releasing his debut EP ‘Don’t Wait’ during the lockdown.

As well as his musical career, Denis has shown a passion for mental health initiatives, especially in young people. When he was 15, he became a brand ambassador for the mental health charity, Power of Musik, which saw him speak in schools across the country. His passion for the subject has persisted, with Denis continuing to speak in schools across the UK over zoom during lockdown last year, as well as plans to continue doing so this year.

With his new single ‘Wrong Reasons’ out today, fans can anticipate more music from Denis this year including an exciting Billen Ted remix on the horizon for July 2nd.