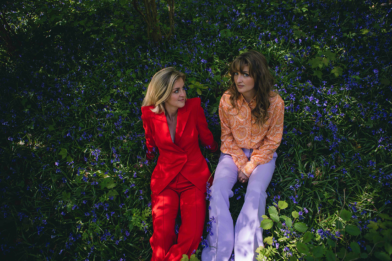 Mixed by Dan Grech (George Ezra, The Killers, Halsey), Ward Thomas’ new take on ‘Don’t Be A Stranger’ is strikingly rhythmic. Cam adds a further touch of country class to proceedings as her voice effortlessly blends with Catherine and Lizzy.

“We’ve always loved the idea of having another vocalist on ‘Don’t Be A Stranger’,” Ward Thomas said. “We love Cam’s music and songwriting skills, but also admire her attitude as a Nashville artist on many issues close to our hearts. To have her sing on one of our songs is a real treat.”

Watch the lyric video to ‘Don’t Be A Stranger’ ft. Cam HERE

Cam, who has written songs for Sam Smith and Miley Cyrus, released her third album, ‘The Otherside’, last year to critical acclaim. Her double-platinum GRAMMY, CMA and ACM-nominated single, ‘Burning House’, remains the bestselling country song by a female solo artist since its release in 2015.

Of the track Cam said, “I love and miss the UK country community so much! I’ve had the pleasure of spending time with Lizzy & Catherine over the years and I just adore them and their killer harmonies. So of course I couldn’t say no when they asked me to join them on this addictive tune.”

‘Don’t Be A Stranger’ was co-written by Catherine and Lizzy with British writers Fiona Bevan and Hight. The track was also produced by Hight who has recently had significant Top10 airplay and sales success in Germany and co-wrote the latest offering from rising star Zoe Wees. The rest of “Invitation” was largely produced by Jonathan Quarmby (Lewis Capaldi, Tom Walker, Finley Quaye), and mostly recorded in lockdown from Catherine and Lizzy’s Hampshire cottage; ’Invitation’ represents an exciting new chapter for Ward Thomas.

Ward Thomas will embark on an intimate “Invitation” acoustic tour, which has been rescheduled for November 2021. The 16-date run includes two nights at London’s Union Chapel on the 29th & 30th.