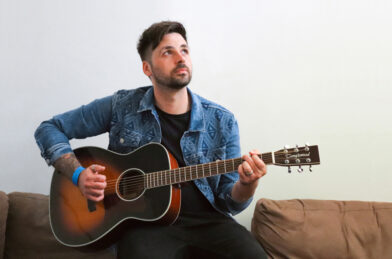 With alluring vocals and an abundance of passion, Ben Haenow has released an acoustic rendition of Marvin Gaye’s iconic 1982 hit ‘Sexual Healing’. The former X Factor winner has beautifully captured the essence of the original while adding an extra layer of vulnerability.

To make the song even more intimate, Ben has stripped back the familiar production and brought his vocals to the forefront. The platinum-selling artist, who is set to become a dad for the first time this year, is sure to evoke an array of emotions with his heartfelt delivery.

“I’ve always loved Marvin Gaye and especially this track, so I really enjoyed working on a stripped-back acoustic version for the new ‘Café Covers’ album. The mood on these albums is always a chilled vibe and though the lyrics to ‘Sexual Healing’ are pretty raunchy, I think they lent themselves well to a more vulnerable stripped back version.

“It’s always an honour to feature on cool compilation albums alongside so many other great artists. Thanks again to the guys at Double J Music for having me on the cut.”

‘Café Covers, Vol. 2’ is available now on CD and all digital platforms. Physical copies can be purchased from HMV and Amazon.

With ‘Sexual Healing’, Ben has once again showcased his remarkable ability to take any song and make it his own. The exceptionally talented musician, who released his charity single ‘If You’re Lonely’ last year, is currently writing more original material and he is certain to ascend to even greater heights in 2021.