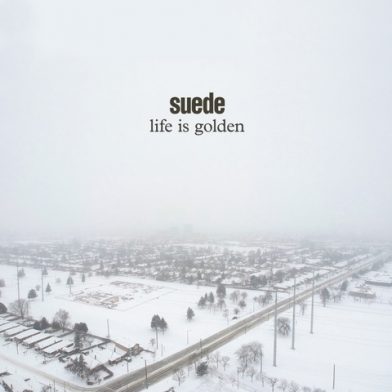 Suede have today released their new single and video for ‘Life is Golden’. Taken from the band’s highly-anticipated, forthcoming album ‘The Blue Hour’, the track is the first official single from the record.

‘Life is Golden’ has all the hallmarks of a classic Suede track from Brett Anderson’s aching, transcendent vocal through to the brooding, dramatic atmosphere evoked by the band’s distinctive performance.

The song is accompanied by a film made by one of Suede’s early collaborators, filmmaker Mike Christie, that he shot in Pripyat, the town that neighbours Chernobyl power station.

Mike Christie says: “It’s not about the tragedy of the disaster that happened all those years ago – it’s about the unstoppable force of life that’s consumed the desolate landscape left behind by humans. It seemed wonderfully apt to set the song to cracked concrete, all conquered by towering golden trees.”

Suede’s new record ‘The Blue Hour’ is the final part of the triptych of albums recorded by the band since they reformed and released 2013’s ‘Bloodsports’. The album is also complemented by some of the subject matter of Brett Anderson’s recent memoir ‘Coal Black Mornings’.

Suede’s previous studio album ‘Night Thoughts’ was released to great critical acclaim in 2016, going on to chart at Number 6 in the UK album charts.

The band are set for a series of European tour dates in September and October, including two shows at London’s Eventim Apollo on the 12th and 13th October. Full dates can be found on the band’s website.