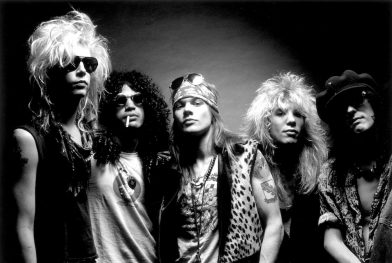 To celebrate the much-anticipated re-release of their classic debut album ‘Appetite For Destruction’, (June 29th, Geffen / UMC), one of the most influential albums of all time, Guns N’Roses in association with UMC and Bravado are pleased to unveil ‘General Admission: London’.

Running from Friday 29th June to Sunday 1st July, ‘General Admission’ will be popping up in Camden Stables, North London, a one off opportunity giving fans a chance to celebrate all things G N’R over one glorious weekend.

Taking place across four rooms in a never before used corner of Camden Stables, the three day pop up will give fans the chance to witness G N’R’s seminal 1988 Ritz gig on a big screen and indulge in special edition Guns N’Roses beer, wine and gin. Fans will also be able to see an exhibition of rare and previously unseen pictures, hear ‘Appetite For Destruction: Locked N’ Loaded Edition’ in its full glory and even get a free Gun N’ Roses tattoo by top tattoo artist, Kindred Tattoos.

‘General Admission: London’ has been curated in association with Bravado, Universal Music Group’s leading merchandise and brand management company. Classic American brand Schott will also be providing fans the opportunity to create their own customised Guns N Roses leather jacket. Throw into the mix an exclusive London inspired apparel range, accessories & homeware items including themed wallpaper, and a first chance for fans to see the gargantuan Locked N’ Loaded Super Deluxe Box Set, and this promises to be a weekend not to be missed.

Following the group’s 1985 formation, Guns N’ Roses injected unbridled attitude into the burgeoning Los Angeles rock scene. They went on to captivate the entire world with the 21st July, 1987 release of Appetite For Destruction, which remains the best-selling U.S. debut album ever, moving over 30 million copies globally. Appetite features indelible tracks such as the No. 1 single “Sweet Child O’ Mine,” “Welcome To The Jungle,” “Nightrain,” and “Paradise City.”

‘General Admission’ takes place from 29th June to 1st July at the below address:

Admission to the event is free on a first come, first admitted basis from 11am on Friday 29th and Saturday 30th June and midday on Sunday 1st July