Barclaycard presents British Summer Time Hyde Park has a monumental show lined up for Sunday 15th July. Paul Simon will close the festival for 2018, which will also be the final UK show of his last ever tour, ‘The Farewell Performance’.

Johnny Flynn is a folk singer, guitarist and poet. Since rising to the spotlight, Flynn has four successful albums under his belt with his band Johnny Flynn & The Sussex Wit.

They’ve been on the road and collaborated with artists such as Mumford and Sons and Laura Marling.

Johnny is also a familiar face in the acting world, best known for his lead role in Channel 4 and Netflix rom-com series ‘Love Sick’.

Tom Chaplin fronted pop-rock band Keane, before making waves as a solo artist with his striking vocals on debut album ‘The Wave’ in 2016, he has since headlined his own national tour. Hyde Park is in for a treat.

One of the biggest popstars of the 21st century, multiple BRIT and Grammy Awards winner, Bruno Mars is taking to the Great Oak Stage on Saturday 14th July, fresh off the back of his 24K Magic World Tour. 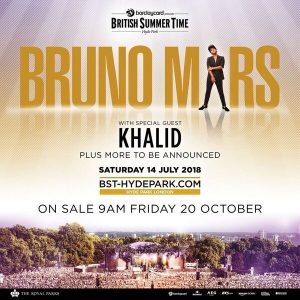 Heating up the stage for Bruno Mars is DNCE. Assembled by frontman Joe Jonas in the summer of 2015, DNCE have shot to success with their debut single “Cake By The Ocean”.

Since then, they have become one of the world’s most buzzworthy acts, winning ‘Best New Act at MTV Video Music Awards in 2016 and releasing their self titled double platinum album the same year.

The legendary Charlie Wilson (A.K.A Uncle Charlie) is a musician, singer, songwriter, producer, multiple Grammy nominee and the former lead vocalist of The Gap Band hailing from the states.

He received the BET ‘Lifetime Achievement Award’ in 2013 and his star pals include Snoop Dogg and Justin Timberlake, for whom he featured on the summer anthem ‘Signs’ in 2004. Hyde Park can’t wait to welcome such a superstar.

This line up promises an entire day of funk, soul and summer tunes. Already announced is Khalid.

Michael Bublé’s classic voice, endearing charm and sheer panache have helped him carve a unique place in the hearts of fans around the world. His Hyde Park show is a UK exclusive performance of 2018.

Joining Mr Bublé on Friday 13th July will be fast rising Irish pop-country star Catherine McGrath, who is making a welcome return to Hyde Park after her outstanding performance last year, and Country-pop trio The Adelaides, who have gone from strength to strength since wowing a hardcore country audience when they played at the Country Music Fest show in October 2017.

Already announced on the line up are Van Morrison, Bananarama, The Feeling and The Shires.

Tickets for Roger Waters (6th July), The Cure (7thJuly) and Eric Clapton(8thJuly) have now SOLD OUT 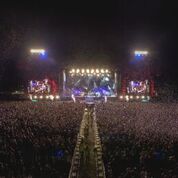