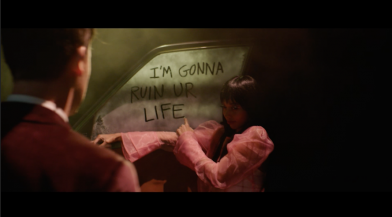 Following the release of new album ‘Beautiful People Will Ruin Your Life’, The Wombats have revealed the official music video for new single, ‘Turn’.

The video was directed by Brother Willis (Beirut, King Krule, Wolfmother), and in his words, “There was something about the pace of the song, coupled with the title of course, that suggested a constantly spinning visual to me. The lyrics so visually depict specific memories that it seemed like a logical way to show memories floating around inside Murph’s head. Also, I love disembodied brains.”

‘Turn’ was written in New York and is probably the most electronic song on the album,” frontman Matthew “Murph” Murphy explains. “Which is weird as I was pushing for the album to be more organic and less synth driven. ‘Turn’ was… kind of a beautiful mistake.”

‘Beautiful People Will Ruin Your Life’ was highest new entry in the Official UK Charts at #3 in it’s release week, leading into a sold-out UK headline tour.

‘Turn’ has amassed over 15 million digital streams and has now spent 8 weeks at #1 on Alt Nation (Countdown). The Wombats’ new material alone has currently received over 34 million Spotify streams. Having debuted as Annie Mac’s ‘Hottest Record’, first single ‘Lemon To A Knife Fight’ was a fixture on BBC Radio 1’s B-List for over six weeks. ‘Cheetah Tongue’ was also added to the B-list and has gained 85 plays by the station to date. The band also performed a live session from Maida Vale for The Annie Mac Show on 6th March, where they played ‘Cheetah Tongue’, ‘Turn’ and ‘Los Angeles’ (St. Vincent cover) and were interviewed by Annie.

After a fully sold-out UK headline tour through March, things came to an explosive head at the band’s sold-out, 10,500 capacity London show at Alexandra Palace. “Doubters take note; these marsupials are officially massive“ said the NME, whilst The Independent awarded their “rip-roaring” set ⅘ stars.

Ahead of a North American tour this summer alongside The Pixies and Weezer, The Wombats are currently touring Europe on the dates detailed below, and will return to the UK for festivals this summer including Reading & Leeds, Isle Of Wight, Glasgow Summer Sessions and Y Not?