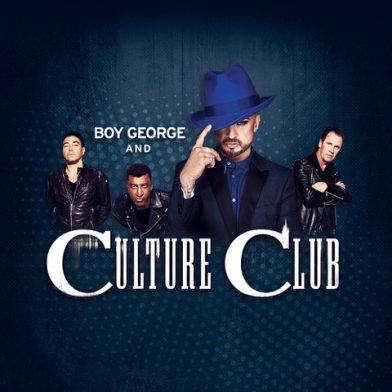 Since their inception in 1981 Culture Club have sold more than 150 million records worldwide, recognised as a Grammy Award winning UK institution with a stream of classic hits including; ‘Do You Really Want to Hurt Me’, ‘Karma Chameleon’,‘Church Of The Poison Mind’,‘Victims’, ‘It’s A Miracle’ and ‘The War Song’. Now they are back with a 11 date arena tour.

The group are fronted by singer/songwriter Boy George,universally loved as one of music’s most iconic artists. Roy Hay, Mikey Craig and Jon Mossmake up the remaining original line up for one of the most exciting tours of the decade!

The Life Tour: starring Boy George & Culture Club will also feature 80’s pop sweetheart Belinda Carlisle and new wave, synth pop artist Thompson Twins’ Tom Bailey, the tour willvisit 11 cities across the U.K kicking off Nov 9th in Nottingham through to Nov 23rd. Tickets for the tour will go on sale at 9am on Wednesday 11th April following an announcement from George on Radio 2 breakfast with Fearne Cotton.

‘We put together an amazing show that is going to be filled with hits and fabulous memories, we know it will be hands down this summer’s best night out,” says Boy George.

Joining Culture Club will be non other than Vangelis Polydorou. His recognition started whilst he was a contestant on BBC One’s The Voice in 2016, beating 50,000 auditonees for a place on the live shows. Vangelis reached the semi finals with Boy George as his mentor, he initially joined the team after impressing George with his rendition of ‘Do you Really Want To Hurt Me’.

And now it seems, the stars have aligned.

Vangelis performs ‘Do You Really Want To Hurt Me’ – The Voice UK 2016: Blind Auditions 5

Programme website: http://bbc.in/1OO6ZSy Bedroom singer Vangelis takes to the stage with his interpretation of Boy George’s ‘Do You Really Want To Hurt Me’. Download The Voice UK App now and be a HomeCoach Android: http://bit.ly/1BhBSw0 iOS: http://bit.ly/1DT9BeK