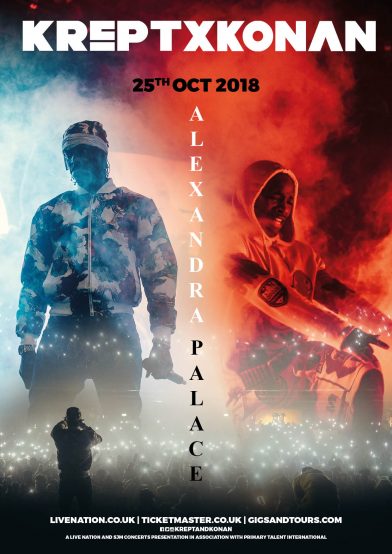 Following on from their triumphant run of sold out dates at Kentish Town last week, ground-breaking UK hip hop duo KREPT & KONAN are proud to announce their biggest live show to date on 25th October 2018 at Alexandra Palace.

KREPT & KONAN stand as forerunners in their scene, the release of 7 DAYS and 7 NIGHTS at the end of last year, saw the duo break yet more records by being the first act in history to have two mixtapes debut in the Top 10 of the Official UK Albums chart simultaneously.

A UK first (no other British artist has released two mixtapes on the same day), 7 DAYS and 7 NIGHTS reflect the two sides of KREPT & KONAN’s signature sound.

The release of 7 DAYS and 7 NIGHTS signalled a welcome return for the trailblazing duo whose ongoing critical acclaim and chart success has helped paved the way for the likes of J-Hus, Abra Cadbra, Yungen, Mo Stack and Section Boys (to name a few).

From the 2013 release of their Young Kingz mixtape which shot into the top 20 of the Official UK album charts (earning them a world record for the Highest-Charting UK album by an Unsigned Act), through to the 2015 release of their debut album The Long Way Home (which became the highest charting British Rap album in UK chart history after debuting at no. 2 in the official UK album charts), KREPT & KONAN have repeatedly broken records while consistently breaking ground.

Tickets for KREPT & KONAN’S upcoming date at ALEXANDRA PALACE will go on general sale on March 29th at 9am with pre sales available. Tickets will be priced at £27.50, and will be available to purchase via Live Nation (http://www.livenation.co.uk)