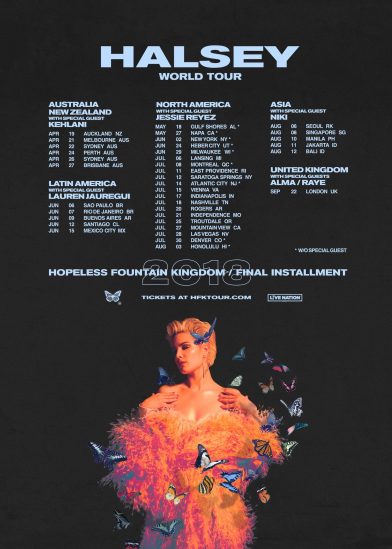 All over the world, Halsey will be accompanied by a team of incredible, buzzing, accomplished women artists.

In Latin America, Fifth Harmony’s Lauren Jauregui -who features on Halsey’s “Strangers” will be supporting on her debut tour.

Jakarta’s own emerging singer, Niki will accompany Halsey on tour in Asia.

Halsey will close the entire HOPELESS FOUNTAIN KINGDOM cycle where it all started, in London.

She’ll have support from ALMA, an electropop vocal powerhouse singer/songwriter and London’s own RAYE, a young rhythmic popstar making waves in the UK music scene.

“Alone” surpassed 1 million streams on both Spotify and Apple Music in three days. In the US, “Alone” has been added to 90 Top 40 stations in its first week.

High-end fashion retailer Yves Saint Laurent recently tapped her as a brand ambassador of YSL Beauté where she will help create and share makeup looks for the prestigious brand.

She will also make her big screen debut as she joins the cast of the animated movie Teen Titans GO! as the voice of Wonder Woman.

And GLAAD has nominated her for “Outstanding Music Artist.”

Recently, Halsey spoke at the 2018 women’s march advocating for equality. Her raw oration has been viewed millions of times and has moved people from around the world.

In addition, her own two double-platinum-certified singles, “Bad At Love” and “Now Or Never” also peaked in the top 3 at Top 40 radio.