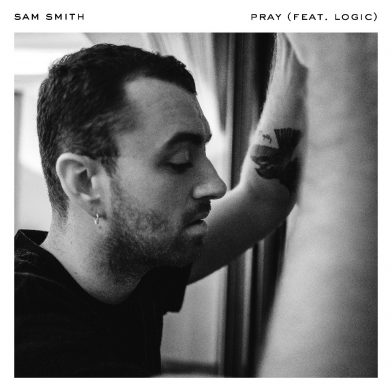 Today, Sam Smith announces his latest single “Pray feat. Logic”, available to stream and buy from 3pm BST on 29th March worldwide. Smith’s sophomore album “The Thrill of It All” is out now.

The new single sees legendary producer Timbaland work with Sam Smith for the first time alongside longtime friend and collaborator Jimmy Napes. The result is a sensational, soul-infused, slow-jam that demonstrates Smith’s delicate yet powerful vocals as he traverses a huge range backed by a powerful choir. The new single also features additional vocals from American rapper Logic transforms the track by adding own unique verses to the original.

Speaking on the inspiration behind the song, Sam explains “We are all looking around at what’s happening in the world and it is just messed. You’ve got no choice but to look up to the sky and put your hands together and pray for something to happen, because I feel helpless as a human right now.”

Smith performed the emotional and hard hitting original song on Saturday Night Live last year ahead his performance at The GRAMMY Awards earlier this year to a spellbound audience in Madison Square Gardens. Smith’s new album “The Thrill of It All” was released last November charting at #1 in the UK and US and has already sold 3.5million copies worldwide.

Starting in Sheffield on 20th March, Smith kicked off his 92 date world tour which sees him tour extensively throughout Europe, North and South America, Australasia and Asia this year.

It’s been over three years since Sam Smith’s debut album was released, and since then he has become one of the biggest acts on the planet with over 17 million global album sales and an array of impressive awards, including an Academy Award, a Golden Globe, three Brit Awards and four Grammy’s, among others.