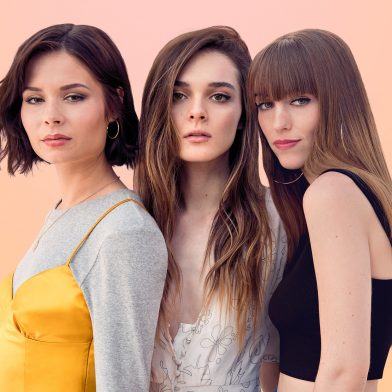 Following the success of Nina Nesbitt’s recent single ‘Somebody Special’ which has had over 12 million streams, today Nina reveals new track ‘Psychopath’ for the launch of Spotify ‘Louder Together’, a program bringing artists together to collaborate on an original Spotify Singles song in the spirit of community, empowerment and inspiration. Coinciding with Women’s History Month, Louder Together’s debut single, ‘Psychopath’ partners emerging female artists, Sasha Sloan, Nina Nesbitt and Charlotte Lawrence, who have come together for the first time to create and record an original Spotify Singles song.

‘Psychopath’ is the first multi-artist collaboration for a Spotify Single, the track centres around the complications of being in love and some of the consequences of a relationship gone wrong.

“It’s such an honour to be part of Spotify’s first ever singles collaboration, especially being the only UK artist,” says Nina, “It was great to work with fellow independent female artists Sasha Sloan and Charlotte Lawrence. I can’t wait for people to hear the song we have written!”

Nina’s recent tracks, ‘Somebody Special’, ‘The Best You Had’ and‘The Moments I’m Missing’ released through Cooking Vinyl, demonstrate a huge leap forward from her Top 15 debut album‘Peroxide’. Demonstrating a command of modernist pop and R&B-tinged sounds which she blends with her own confessional songwriting, they’ve both been embraced by fans including Hollywood royalty in the shape of Chloë Grace Moretz and Taylor Swift, who included ‘The Best You Had’ on her ‘favourite tracks’ playlists.

Having grown-up in a small village just outside Edinburgh, Nina Nesbitt enjoyed a whirlwind of success with the ‘Peroxide’ album, but she was soon ready to move on. An organic evolution, her 2016 track ‘Chewing Gum’ was the sound of her breaking out of her comfort zone and indulging fully her love of pop. Her desire to challenge herself continued with the low-key ‘Life in Colour’ EP which found Nina writing emotional and sometimes dark stories that were inspired by experiences which fans had sent to her.

Still only 23-years-old, Nina Nesbitt has found a way to make it work for her in an industry that often doesn’t give you the time to settle into the artist you want to be. Rather than rush into making another album for the sake of it, she waited for the inspiration to strike and let it slowly take shape organically. What she excels at is being an artist, but one that’s fully in control – the very best kind.

Nina also recently announced a new UK Tour in May, which includes a headline date at London’s Heaven on 15th May.

The live dates are: