Following a phenomenally successful 25 date tour of Europe and the UK this past November and December 2017, Queen + Adam Lambert have made the surprise announcement that the band will play further shows in Europe this summer.

The new tour dates follow unprecedented demand for more concerts in Europe and will see the band perform in cities not included in last year’s tour.

Already announced are shows in Italy and Germany. Others to be announced are expected to include Portugal, Spain, Denmark, Norway, the Netherlands and Belgium.

In the UK the band will return to play London’s O2 Arena on 2 July, where they performed

two sold out shows at the end of their last tour. Tickets for the London O2 show go on sale to general public on Friday 9 February at 9am.

The summer shows tour will again showcase Queen + Adam Lambert’s spectacular new stage production which was conceived around the 40th anniversary of Queen’s News of the World album and drew rave reviews across the media.

Queen + Adam Lambert’s magnificent 2017/2018 touring show has been custom tailored for the band by some of the world’s most cutting-edge creative talents.

The production’s genuinely eye-popping laser elements are the work of ER Productions, behind both the opening and closing ceremonies of the London 2012 Olympics and seen by over 900 million people worldwide.

Ahead of the forthcoming European summer dates, they play ten sold out arena shows in Australia and New Zealand, beginning in Auckland with two shows at Spark Arena on February 17 and 18, and ending at Perth Arena on March 6, 2018. 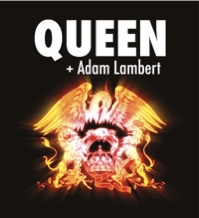