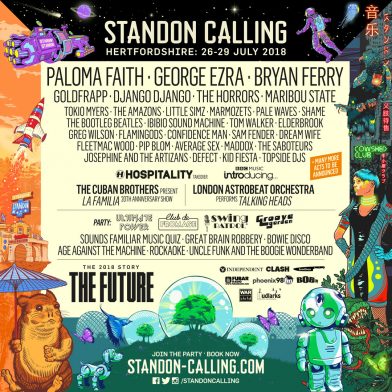 A go-to destination for the ultimate festival weekend of music, arts and entertainment for all the family -Standon Calling is set for its biggest year to date, with two of British music’s most adored modern favourites George Ezra andPaloma Faith leading the way as the final two headliners this July.

One of the biggest-selling breakthrough names of the decade,George Ezra and his earnest tales of life and love have taken him around the globe since the release of debut album ‘Wanted On Voyage’. With a catalogue of singalong favourites under his belt (from ‘Budapest’, ‘Listen To The Man’ and ‘Cassy O’ to ‘Blame It On Me’ and ‘Don’t Matter Now’), George has become a unique talent whose immediate warmth and distinctive voice has seen millions swoon. Born and raised just down the road in Hertford, his headline set at Standon Calling is destined to be a tender and electric homecoming. An unmissable festival moment,George Ezra at Standon Calling will be a coming-together of friends, family and fans for a crowning set from Hertfordshire’s favourite son.

Speaking about his hotly anticipated headline slot, George Ezra said:
“This will be the closest to a homecoming gig that we have ever performed! I have family and friends that are at the festival every year and they absolutely love it, I hope me performing doesn’t change that for them… I was very flattered to be asked to play by the guys at the festival and can’t wait to get up on stage. Does anybody know what the fancy dress theme is this year?”

Combining showbiz, laughter and soaring anthems, Paloma Faith is one of the nation’s biggest pop stars. From BRIT Awards, to double-platinum albums and countless memorable performances – Paloma has become a British institution, unafraid to speak out and thriving with individuality. With a live show that has seen arenas bow down in awe, Paloma Faith is the perfect headliner to kick off the weekend at Standon Calling, with what’s sure to be a tour de force of an artist at the peak of her powers.

George Ezra and Paloma Faith join the previously announced Sunday night headliner Bryan Ferry at the top of the bill for a truly staggering weekend of front-runners, exciting creative forces and some of the most talked-about names in modern music.

Effortlessly cool and undeniably iconic, Goldfrapp have become an electric powerhouse lead by the incredible presence of Alison Goldfrapp herself. Across a nearly 20 year career, their immediate synth-pop sounds have pushed the boundaries of electronic music – with the likes of ‘Ride A White Horse’, ‘Ooh La La’ and ‘Number 1’ ready-made for big festival moments.

Taking to the stage as very special guests ahead of Sunday night headliner Bryan Ferry, expect their set to be a showcase of immeasurable quality and swagger.

Speaking about her special appearance at this year’s festival, Alison from Goldfrapp said:
“I’m really excited to be playing Standon Calling this year, a festival I’ve heard so much about over the years. Playing before the iconic Bryan Ferry is going to be a very special feeling, and I can’t wait to perform for you all. See you in July”