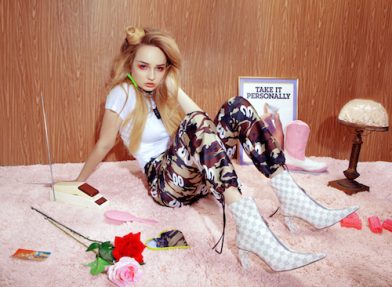 ‘Faded’ follows Kim’s recent collaboration with Charli XCX on ‘Unlock It’ (ft. Kim Petras and Jay Park) from Charli’s ‘Pop 2’ mixtape. Speaking to Beats 1’s Zane Lowe about the collaboration with Kim and Jay, the British songwriter recounted; “we actually met at Sophie’s show in LA. We had a couple of mutual friends, so I managed to get her number from someone and we started texting about doing a song. Then this song just came together when I was in New York with A.G. Cook and this was one of the last ideas we put down for the mixtape. I left two verses open, I sent it to both of them, and they both kinda crushed it!”

The video, directed by Nicholas Harwood – whose credits include videos for Porches and Sophie as well as producing the videos for Blood Orange – perfectly captures everything about Kim fans have come to love: droolworthy outfits form established and avant-garde designers like the purveyors of all things pop MaryMe-JimmyPaul, fashion wunderkind Christian Cowan, empowering architectural active wear Chromat with art direction straight out of a 90s teen TV show.

“For a moment, I’d love for listeners to forget reality and have fun when they listen to me,” she leaves off. “They don’t have to think about anything negative. I hope they blast it in the cars or when they’re getting ready and want to feel fabulous. I hope it’s a soundtrack to their lives.”

Dubbed Hollyweird-via-Cologne pop conceptualist by Pitchfork, Kim’s breakout single ‘I Don’t Want It At All’ has quickly amassed more than 5 million Spotify streams and hit #1 on the

Global Spotify Viral Chart just four days after release. The dreamy video which features a special guest appearance by Paris Hilton, received praise from the likes of Wonderland, Just Jared, Perez Hilton and Idolator, culminating with the Daily Mail calling the visuals “girly glam pop treat for the eyes and ears” and Refinery29 declaring Kim to be “the next big thing in pop music”. Kim’s other recent singles ‘Slow It Down’, ‘Hills ft. Baby E’ and ‘Hillside Boys’ were all featured on Spotify’s New Music Friday upon release. Additionally, Kim has been chosen as one of Spotify’s RISE artists. RISE is an exciting emerging artist program designed to identify and break the next wave of music superstars through Spotify’s unmatched cultural influence and 140+ million music fans.

Since her childhood in Cologne, Germany, Kim has been in love with pop music. It was a window into the bigger world outside of her little town. Kim notably began transitioning with female hormone therapy following her twelfth birthday before making worldwide headlines as the youngest person to receive gender reassignment surgery at the age of 16. Her experiences and bravery are subtly present in her music and Kim’s undeniable voice and imaginative artistry have quickly made her one to watch for 2018.

Having already released enough tracks to make a killer album in the near future, with ‘Faded’ Kim Petras give us another dose of pop brilliance, one that will cement her status as the new princess of pop.