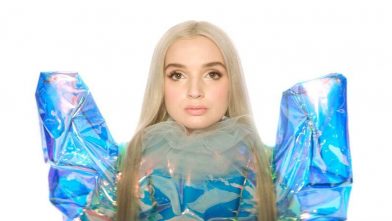 Join Internet sensation Poppy as she enters the real world for the very first time and quickly realizes that fame and fortune comes at a price with secret societies, dangerous fanatics, and a very envious mannequin named Charlotte.

I’m Poppy … The video that introduced the world to Poppy on YouTube showed her simply repeating this phrase for 10 minutes straight, and was viewed over 14 million times. We had an instant audience, so we made 300 more videos.

Even though every video on the YouTube channel is shot in the same white room, we are very eager to show Poppy out of that room and explore the larger world around her.

The show “I’m Poppy” will finally answer questions people have long wondered – who is pulling the strings? Is Poppy human? Why is she making these YouTube videos? – but for every answer, more questions will arise.

Throughout the series, we will see how Poppy came to live on the internet, who is responsible for her ascent into stardom, and what prophecies she may (or may not) be fulfilling.

The satirical tone of the series will live somewhere between David Lynch’s Twin Peaks and Nicolas Winding Refn’s Neon Demon. As we see more of the world Poppy exists in, we will explore the trappings of celebrity and consumerism, as well as envy, greed, pride – basically all of the deadly sins. We all are participants in the culture that creates stars like Poppy. We project onto them our fantasies and our fears, and we love to prop them up and see them fall. They are avatars for the best and the worst in us. In this series, we will be navigating these real-world truths through the exaggerated lens of the Poppy character.

So, won’t you take the red pill and join us?

Join Internet sensation Poppy as she enters the real world for the very first time and quickly realizes that fame and fortune comes at a price, with secret societies, dangerous fanatics and a very envious mannequin named Charlotte.

“‘I’m Poppy’ is one of the most amazing things I’ve ever been a part of, and premiering at Sundance is an honor and a dream come true,” says creator Titanic Sinclair.

After an incredibly successful, sold out first leg of her “Poppy.Computer” North American tour, Poppy announced ‘Poppy.Computer pt. 2’ – the second leg kicking off in New York, NY at the Bowery Ballroom on January 30, 2018. Tickets are available now at Poppy.Computer.

The “Poppy.Computer” album is out now on Im Poppy Records/Mad Decent and available for digital download and streaming via all participating digital retailers HERE.

For more information on the tour, please visit impoppy.com/tour/.