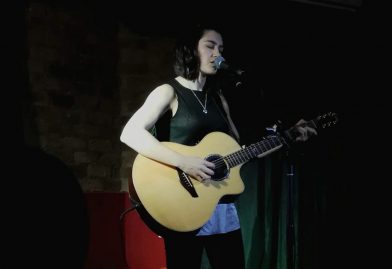 A talent for writing autobiographical, relatable songs has brought Hannah Trigwell on an extraordinary and inspiring journey that has culminated in her upcoming debut album ‘Red’. An album I had the pleasure in hearing and seeing live at her recent preview show.

The Finborough Arms; a small, sentimental pub located in Kensington, was the perfect place for the singer-songwriter from Leeds to present her new songs alongside such a attentive, appreciative crowd.

Not only is Hannah’s music warming, relatable and known by many, her technical ability and timing skills prove to be exceptional through her complex strumming patterns and lyrical content. Her melodious and angelic voice is something that engages her audiences and the use of her loop-pedal builds layers, thickness and energy to the song; creating an atmosphere that would usually be actioned by a larger group or band. This allows her to captivate her audiences as an individual.

Hannah’s song ‘without you’ is an autobiographical piece that reminiscences feelings of love and loss. An emotion that most individuals are able to relate with on a personal level. The ability to write lyrics that appeal to larger audiences is a great skill to uphold and she exceeds this. Some individuals find it hard to express emotions but Hannah allows people to open up and engage through her lyrics.

Hannah’s journey has been a truly remarkable one, having released numerous singles and 3 EP’s, all of which contained original material, she is now releasing her fabulous new Album, ‘Red’.

Not only has she reached number 6 in the itunes Singer-Songwriter charts, she has also released music with an independent record label that she founded herself in 2016. This reached number 13 in the club charts and is a complete success. These are just a few aspects which have moulded the English soloist into the performer she is today.

Hannah Trigwell is going places and I’d highly advise you to watch her ever growing journey through the music industry, It’s due to be a great one.