Sigma team up with Tinie Tempah & Yxng Bane on ‘Forever’ 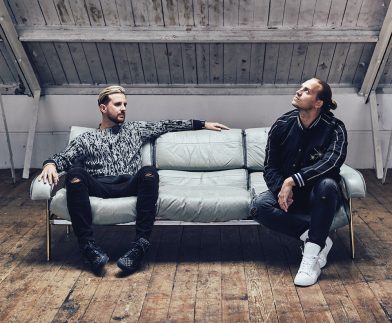 Today British DJ and record production duo Sigma unveil their new single, ‘Forever’, which is out now via 3Beat. The announcement follows a busy summer of live performances playing to over 400,000 fans, including a sold-out headline show at London’s Royal Albert Hall and appearances at the likes of V Festival, Creamfields, Pukklepop, South West Four, headline Asia and North America tours, plus their very own summer residency at Ibiza’s Amnesia.

Featuring Tinie Tempah, Yxng Bane, Quavo and Sebastian Kole, the trap infused track is an impressive step forward for Cam and Joe, marking a notable shift in Sigma’s musical craft and one likely to propel them even further into the global consciousness.

Speaking about the track, Joe Says “Forever is the next step in our story. Cam and I have always wanted to make music that had that hip-hop feel to it. It’s a genre we’ve both had a strong association with growing up and also with the music we’ve previously made.”

“Working with Quavo and Sebastian has been great. It was the first time we had been to LA to record, so for a record like this to come together so naturally out there was pretty crazy,” says Cam.

As one-third of the Migos, Quavo is quickly becoming one of the most recognisable and influential voices in hip-hop today. Currently, ATL royalty, Quavo has been busy working on the hottest guest verses of this year, including DJ Khaled’s ‘I’m The One’, Drake’s ‘PortLand’ and A$AP Mob’s ‘RAF’.

In the past five years, American singer-songwriter Sebastian Kole has gone from aspiring songwriter to one of the hottest new hitmakers. He quickly snapped the industry attention in 2015 with his co-writing skills on Alessia Cara’s single ‘Here’. Currently signed to EP Entertainment/Motown Records, Kole recently released his debut album ‘Soup’.

Since arriving on the scene in 2011, Sigma have achieved what most artists can only dream of. To date they have had ten consecutive U.K radio hits, two BRIT Award nominations, sold five million singles, had two international platinum-selling singles, two gold singles and a gold album. The duo have also racked up over 500 million streams and collaborated with a plethora of artists, including Rita Ora, Take That, Labrinth, Ella Eyre and Paloma Faith.

With ‘Forever’ set to follow the path of their recent success, Sigma continue to make their way to the forefront of the music industry, pioneering the next wave of dance music, with a huge following of supporters at their side.