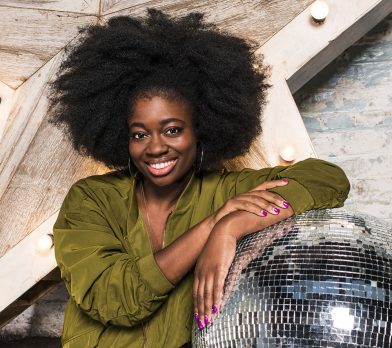 Top of the Pops have announced BBC Radio 1’s Clara Amfo as the new co-presenter of the Top of the Pops Christmas and New Year specials that will be hitting BBC One screens this festive period. Clara will be the first new presenter of the biggest pop party on TV in well over a decade. She’ll be joining Fearne Cotton to host the two, one hour specials that will celebrate the biggest hits and most successful acts of the year.

Clara hosts Radio 1’s mid-morning show (weekdays, 10am-1pm) – the home of Radio 1’s Live Lounge – where some of the biggest and best new artists in the world, from Taylor Swift, Ed Sheeran and Jay Z to Stormzy, Wolf Alice and Royal Blood, line up to perform their own hits as well as unexpected covers.

Clara Amfo says: “I’m so happy and honoured to be presenting Top of the Pops alongside Fearne. It’s an iconic show that I’ve grown up with and continue to enjoy watching, especially during the festive season.  2017 has been a rich year in pop and I can’t wait to celebrate it with the artists, Fearne and everyone at home.”

Mark Cooper, Head of Music Television, BBC Studios says: “Clara is a great champion of all kinds of pop music and she lights up the screen with her radiance. She’s a joy on Radio 1, she did a great job presenting on BBC TV at Glastonbury this year and now she’s co-hosting Top of the Pops! Clara and Fearne will be a formidable duo!”

On Christmas Day, Top of the Pops will be a merry feast of all things pop, with a line-up of some of the biggest musical names of 2017 including Ed Sheeran, Dua Lipa, James Arthur, Clean Bandit, Rita Ora and The Script.

Top of the Pops will return to the nation’s TV screens over the New Year period, reviewing 2017’s year in music with a star spangled line-up of some of the brightest chart stars including Craig David feat. Bastille, Paloma Faith, Ed Sheeran, Dua Lipa and Rita Ora.