Today Fusion Festival is excited to reveal the festival’s biggest line up yet including two huge festival exclusives. The hit music stars playing this year’s festival were announced this morning on Capital Liverpool by Capital Breakfast’s Adam, Gemma & Dylan. 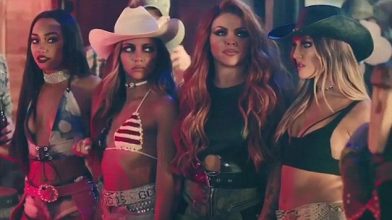 Pop sensations Little Mix headline Saturday night with their only UK festival appearance this year. The UK’s most successful live act, Take That, will then close Sunday night, performing their incredible set on the Fusion Festival stage. Fusion Festival will take place at Otterspool Promenade this September 2nd and 3rd. Tickets are on sale Friday May 26th at 9am from www. fusionfestival.co.uk

Little Mix say “We’re really excited to be headlining Fusion Festival with absolute legends, Take That. We can’t wait to see all our fans up in Liverpool for what we know will be a sensational weekend of live pop music.”

Take That say “We love Liverpool and can’t wait to close Fusion Festival on the Sunday night. It’s going to be the best finale to the summer, playing our only UK festival show of the year! Can’t wait to see you all.”

Little Mix picked up the award for ‘Best British Single’ at The BRIT Awards earlier this year, after opening the show with a sensational, jaw dropping performance of their fourth number one smash ‘Shout Out To My Ex’.  Their latest album ‘Glory Days’ stayed at number one in the UK for an incredible five weeks. The band recently toured the USA for two months with Ariana Grande.

Take That are one of the UK’s most successful acts with an enviable career spanning three decades. The band have sold over 8.5 million concert tickets setting the record for the fastest selling tour of all time in UK history when 1.34 million tickets were snapped up for their Progress Live Tour in less than 24 hours. In the UK alone, Take That have achieved seven UK number one albums, 12 number one singles, [sold over 45 million records], won five Ivor Novello Awards, and eight BRIT Awards. Internationally, they have scored an incredible 54 number one hits and 35 number one albums.

Fusion Festival is again teaming up with Capital, Liverpool’s no.1 hit music station, to bring music fans access to the biggest acts in the world with exclusive coverage across the festival weekend. Capital will also give listeners the chance to win tickets to Fusion Festival.
Festival-goers can expect the biggest pop anthems and a wide range of entertainment and attractions at the hottest event to round up the summer.

Damien Sanders, Event Director of Fusion Festival said: “We are more excited than ever about this year’s festival, having two of the world’s biggest pop acts perform on our stage is a major coup and we are all really looking forward to a truly memorable weekend