Brian May and Kerry Ellis have announced the forthcoming release of a new much anticipated second studio album, titled “GOLDEN DAYS”.

The 13-track album, which includes five original compositions, two by May, including the title track, and three by May and Ellis, is to be released in the UK and Eire on April 7th.

The album also includes new rock arrangements of some of May and Ellis’ favourite songs of all time: a tribute to guitar virtuoso Gary Moore, two songs dedicated to their work on behalf of wild animals, and a couple of reinterpretations of songs which have already become essentials in their live act.

“This new record has both our names on it, and breaks new ground. We produced ourselves together as a team. I feel confident it’s the best thing we’ve done and a worthy testament to 13 years of belief.”
Since undertaking their first “Anthems” tour of the UK in 2011, May and Ellis have gone on to play five further series of UK dates as well as widely touring Italy and Eastern Europe.

In addition, they have regularly performed high profile one-off concert appearances, such as the prestigious Montreux Jazz Festival, Italy’s San Remo Festival screened live across Europe, and most recently a triumph at a packed Opera cross-over extravaganza in the beautiful Arena di Verona. 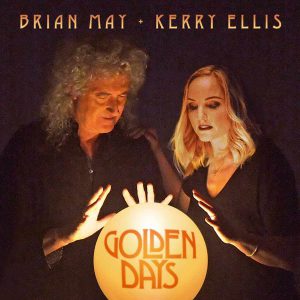