Victorious (25-27 August 2017) – the UK’s biggest metropolitan festival – has today announced an incredible second wave of artists to join an impressive bill that already features Stereophonics, Madness, Elbow and many more.

Having finished runner-up in the sixth series of The X Factor, Olly Murs was propelled to heights of pop stardom and into the nation’s hearts with a string of hit singles and a double platinum selling debut album. Rightly renowned for a dynamic live show, his Victorious performance is sure to put a smile on everyone’s face.

Joining Olly at the top of the bill is MOBO winning R&B singer Rita Ora. From coaching on The Voice UK to judging on The X Factor to acting in Hollywood movies not to mention a number one album, Rita has found time in her hectic schedule to bring her trademark R&B party to the main stage at Victorious.

Joining Madness on the all-new Friday night Opening Party is legendary Mancunian powerhouse The Charlatans. With almost 30 years at the forefront of indie rock and 12 studio albums into a remarkable career, their set will be packed with stand up hits and the hope of some new material. 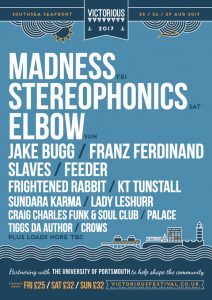