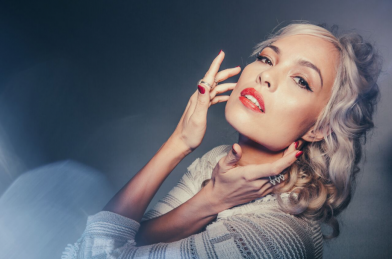 Earl is fulfilling her lifelong musical ambition to perform her own inventive brand of Jazz as she records her brand-new album.

Collaborating with an enviable array of talent, including Paloma Faith and Basement Jaxx as well as the remarkable New Orleans Preservation Jazz Hall Band, she saw her first independent single play listed at Radio 2, with the follow-up ‘I Love You’, leading to a second Radio 2 playlist and a spellbinding Maida Vale Session.

Earl’s brand new single taken from her forthcoming debut will be ‘Tongue Tied’, which showcases a more up-tempo, syncopated swing side to Earl’s musical cannon, utilising an instantly recognisable sample by Professor Bobo and Bosko Slim.

Earl has also been announced as special guest on Rick Astley’s sold out UK Tour through March and April, running for 23 dates including a very special night at London’s legendary Royal Albert Hall on April 13th.