WILD LIFE Festival, the event created by Disclosure and Rudimental in 2015, announces its third and final wave of its 2017 line up …

UK rapper and grime pioneer Dizzee Rascal will take to the WILD LIFE stage on the Saturday to perform a career spanning set. Mercury Music Prize winner, Dizzee, who shot to fame in 2003 with the now-classic ‘Boy in the Corner’ paved his way to international stardom having collaborated with Armand Van Helden and Calvin Harris among others.

Following his epic performance with Ed Sheeran at the BRIT Awards last night, acclaimed grime pioneer and multi-MOBO Award winning artist Stormzy also takes to the stage at WILD LIFE this year for a very highly-anticipated appearance ahead of what is set to be a huge year for him.

Rudimental and Disclosure also return for two very special performances, with Disclosure performing a back to back set with Armand Van Helden and Rudimental playing a highly-anticipated DJ set. 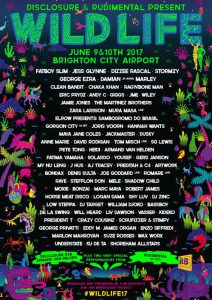