Announcing the new Fireball UK partnership earlier this year, Slam Dunk Festival 2017 are pleased to reveal the complete line-up for the Fireball Stage.

They will be joining the previously announced Bowling For Soup, Less Than Jake, Reel Big Fish, Goldfinger, Mad Caddies and MC Lars for the most envied party weekend of the year.

This all-American stage features the biggest ska punk & classic pop-punk line up the UK has ever seen, uniting regular touring buddies and bands that have never played together before to create a must-see spectacle for both new and die-hard fans of the genres.

Festival Director Ben Ray says ‘Many people know that this stage is very close to my heart. When I started the Slam Dunk club night back in 2001, bands like Less Than Jake & Reel Big Fish were the one’s that helped shaped it and established the brand. It is an honour to be able to bring these bands together for the biggest bill of it’s kind ever in the UK’

Kicking off in Birmingham on Saturday 27th May, the festival will travel to Leeds on Sunday 28th May before finishing up in Hatfield on Monday 29th May, once again ensuring the Slam Dunk Festival Bank Holiday Weekend is the only place to be to catch the finest in alternative music. 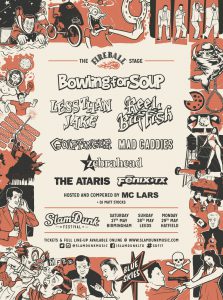