This double LP features brilliant new re-workings of classic Jamaican cuts, some brand new material, and a few gems from Neville’s past, along with a bonus dub album offering serious bass-bin shaking mixes.

Known as The Original Rudeboy, Neville Staple is a Jamaican-born British singer credited with changing the face of pop music not only once but twice. His 35-year career in the music business is well documented, from the early days with The Coventry Automatics, The Specials and Fun Boy Three to collaboration with Ranking Roger in The Special Beat and various other collaborations during his solo career from the 90s until the present day.

Following on from the 2009 Specials reunion and Neville’s departure from the band in late 2012, he continues to be a forerunner of the ska movement.

The lead track ‘Return of Judge Roughneck’ is a fun ska dance video filled with Judge Roughneck’s take on the world of politicians, bankers and bullies, along with dancing barristers and cocky jailbirds.

The Neville Staple Band is playing shows all around the UK in late winter and spring in support of ‘Return of Judge Roughneck’. 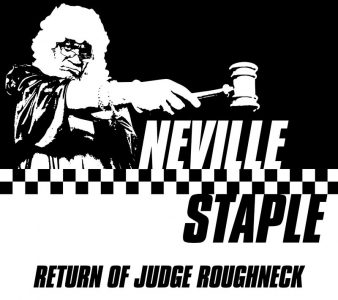