Closing out a weekend of incredible live music and definitive festival moments, Live At Leeds has announced indie titans Maximo Park as headliners for Live At Leeds: Finale

Taking place at the O2 Academy in Leeds the day after the festival itself, Live At Leeds: Finale is set to round out the weekend in emphatic style, bringing an incredible bill of artists to the city for a celebratory end to another packed Live At Leeds weekend of game-changers and thrilling new music.

Headlining the closing show, are blistering Geordie icons Maximo Park bringing over a decade of innovative and quirky art-rock kicks to Leeds city centre. With a back-catalogue of some of the past decade’s most anthemic moments (‘Apply Some Pressure’, ‘Our Velocity’ and ‘Graffiti’ ), their incredible live show has cemented their position as one of the nation’s most beloved bands.

Returning this year with sixth album ‘Risk To Exist’ – there’s no better band to see off the Live At Leeds weekend. 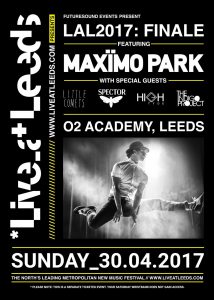 Joining the bill for the closing night are a string of British indie favourites, influential indie-scratchers Little Comets will return to the city following the release of latest album ‘Worhead’ whilst Spector are guaranteed to deliver another synth-laden masterclass. With teen upstarts High Tyde and local favourites The Indigo Project also set for huge performances.

The show comes a day after Live At Leeds itself, the award-winning new music festival that stands as the very first place to hear the essential sounds of 2017.

Boasting over 180 artists at venues across the city, this year is primed with revered favourites and refreshing new voices including sets from Rag ‘n’ Bone Man, Slaves, Wild Beasts, White Lies, Nothing But Thieves, Jagwar Ma, Temples, Black Honey, Superfood, Honeyblood, The Big Moon, Fickle Friends, The Amazons and many more.

With Future Islands confirmed to headline the very special Live At Leeds: Welcome Party on Friday 28th April, Live At Leeds is set to incorporate a defining weekend that points to the future of invigorating new music. 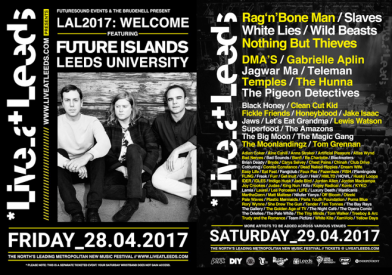