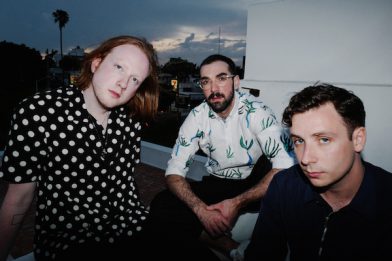 Two Door Cinema Club release their new single ‘Ordinary’, the latest to be lifted from their third album ‘Gameshow’, which reached #5 in the UK album chart upon its release in October. The new single precedes an extensive UK tour in early 2017, including two dates at London’s Alexandra Palace, with all shows selling out almost instantly.

On ‘Ordinary’, frontman Alex Trimble exhibits a swaggering vocal delivery against vibrant, fever pitched sonics, harking back to the ’80s with skittish synths and a vigorous guitar riff. ‘You said “you’re drunk,” I said “I know!”’ flirts Trimble, confidently jerking into falsetto with the vitality that defines the album; poised, assertive and immediately infectious. Citing an eclectic range of influences ranging from Prince, Bowie and Chic to Krautrock, Neo Soul and modernist pop, the band have stretched far beyond their traditional sound to fully embrace pop sensibilities and funk-laden, off -kilter melodies.

Working alongside esteemed producer Jacknife Lee (REM, U2, Bloc Party), Kev, Sam and Alex began recording ‘Gameshow’ after a much-needed break from the gruelling ‘record-tour-promote’ schedule that had come to dominate the school friends’ adult lives. Returning to the drawing board to reexamine what it is about music that truly excited them in the first place, the trio have produced an album that exudes the energy of a clearly reinvigorated band, with a whole new centred sense of purpose.