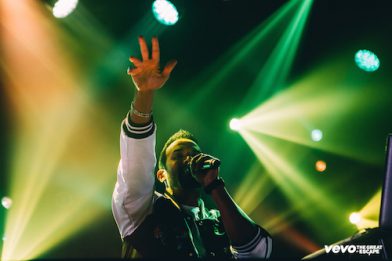 It has been the most talked about and relevant return to music by an artist in decades, 16 years after his debut album reached Number 1, Craig is back at the top. With his latest album, Following My Intuition going straight to Number 1 in the Official Albums Chart when released, Craig today releases a live video for new single ‘Change My Love’.

Add to that a headline TS5 tour which sold-out in seconds, selling out shows all over the globe and announcing a huge 16 date arena tour for 2017, it would be an understatement to say that the last year has been anything short of monumental for Craig.

A standout track from the album, ’Change My Love’ showcases the contrast of genres on Following My Intuition. Full of infectious melodies blended with an RnB feel – this MNEK co-write is the sound of the Craig David we fell in love with but in a fresh new form.

16 years since the critically-acclaimed, ‘Born To Do It’ changed his life, Craig catapulted back into the charts and into the nation’s hearts with Big Narstie on the gold certified single ‘When The Bassline Drops’, marking the beginning of his triumphant return.

Demand for Craig’s live shows are higher than ever following the incredible success of his critically acclaimed ‘TS5’ shows. Starting out as the most exclusive pre-party in Miami, hosted in his penthouse home, Tower Suite 5, ‘TS5’ has gone on to become the must-see live event of the summer with Craig playing sets at the biggest festivals and clubs around the world.