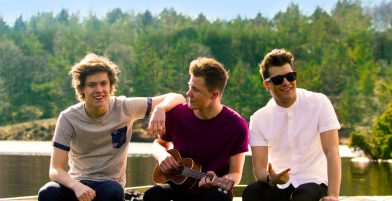 Norwegian boy band The Main Level have announced the details of their first ever UK show at London O2 Academy2 Islington on Thursday 18th August 2016.

The band was formed in Bergen, Norway in the Spring of 2014. Laurent and Sander had been singing together since their school days, and when Alex was introduced to them they clicked immediately. Working with the highly rated production team Arron and Blue, the band started out filming covers for YouTube and very quickly noticed fans from all over the world following them, calling themselves Mainers and setting up their own fan-sites. From Brazil to France, Spain, Germany, UK and US, Mainers were spreading the word everywhere.

Back in Norway they signed to Tunepark Records and released their first single Blackout, which got massive airplay at the most popular radio national stations. The Main Level were going places. That year saw them play many of the most important festivals in Norway, open bills for a wide variety of big names and play the whole Cancer Society Tour in Norway being seen by 100,000 people in 8 days.

Then came ‘My Girl’, the infectious instant pop classic that elevated them to the status of one of Norway’s most popular exports, as it was voted one of the biggest hits of summer 2015 by NRJ. The fanbase grew larger by the minute as the band were mobbed by large crowds at airports and venues around the country. Their hotels became well kept secrets in order to attempt to prevent scenes of hysteria. In summer 2015 they played the biggest outdoor festival in Scandinavia, with over 100,000 people and followed up with a headline tour across Norway. The Main Level was officially a phenomenon.

Since then the band has grown rapidly on social media with ever increasing numbers on Instagram and a fanatical following on the massively popular app Musical.ly, where the band have focused their efforts to successfully expand their global base. The Main Level has visited many major TV programs in Norway, been nominated for Nickelodeon Kids Choice Awards in the US and is about to announce some big UK festival news.

The band play their first London headline show on August 18th at O2 Academy2 Islington, where people can hear their current single, the insanely catchy ‘A Million More’. The word is already spreading among the UK Super Mainers. Expect to experience The Main Level very soon. Sander, Alex and Laurent are coming your way.

Tickets go on sale 9am Friday 27th May and will be available at www.gigsandtours.com