Fleur East made her US TV debut last night with a huge performance on the finale of Dancing With The Stars, taking the stage outside, and stunned with an amazing performance of her global smash hit ‘Sax’. 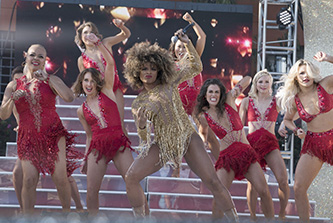 Tonight Fleur will perform on The Late, Late Show with James Corden, before appearing on The Today Show next week. Sax has already been a smash hit in Mexico, The Netherlands, Costa Rica and Eastern Europe.

Now Fleur’s US Campaign has kicked off big time! Fleur has been absent from UK shores for a few months promoting Sax worldwide – but will be back in the UK after this US promo trip to announce a new UK single and play a series of summer gigs including MTV Crashes and V Festival.

It’s the closest race ever on Dancing With The Stars with some of the best dancing celebrities have ever pulled off. Ginger Zee and Valentin Chmerkovskiy, Nyle DiMarco and Peta Murgatroyd, and Paige VanZant and Mark Ballas have one last night of competitive dancing, vying to win the judges’ and America’s votes to be crowned the “Dancing with the Stars” champion.