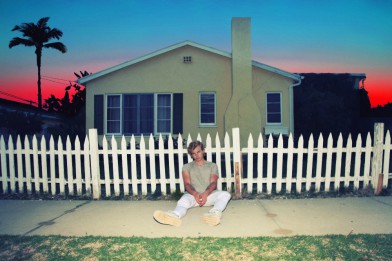 Singer-songwriter Chris Bourne has a lot in common with his older brother James Bourne from the band Busted, persistence and hard work in the music industry being one. Chris is currently in LA recording but he took time out of his busy schedule to chat with our man Harry Seaton.  He gave us the full lowdown on his new tune ‘MFT80s’  and what to expect next. Check out the interview and video for ‘MFT80s’ below:

Q: Hey how are you?
A: I’m good just woken up, drinking coffee mate

Q: What time is it over there?
A: About 10 o clock in the morning

Q: It’s half 6 over here, wish I’d just woken up!
A: Mate if I was back home I’d be drinking a cup of tea right now

Q: So I’ve listened to the new single and I thought it was awesome, the concept, the music video, it’s like a big throwback, I loved it.
A: Really glad you like it man, I really hope people appreciate it in that way, it’s a throwback!

Q: So the song comes out on Friday right? And is that digital or physical?
A: Yeah it’s out on Friday purely digital on all major online websites, iTunes, Apple Music, Amazon, Spotify, the one that Kanye west started that’s kinda gone a little shitty

Q: It’s quite clear what inspired the song, but did any artists in particular inspire the track?
A: We started jamming some ideas and wrote it and recorded it a couple months ago, it’s about this crazy cool story about this girl who has this mixtape and you kinda fall in love with this chick cos she cranks 80s music and its hot and different but the song to me sounds more like a 90s song, more 90s kinda vibes just with some 80s elements. I just think it’s fun man.

Q: I think when you hear people use the term pop punk and pop rock, they tend to use it to describe pop with a punk influence or pop with a rocky influence but I feel like this has the balance, it’s the true meaning of pop rock.
A: I agree, I really do agree. My old band Hollywood Ending, I loved writing those songs and there’s some certain energy about this type of music that I think people will dig. A lot of bands like Walk the moon and Hello goodbye inspire me and even Owl City to an extent. I think it’s got the cool kinda pop punk vocal.

Q: How have you found the transition from being in a band to a solo artist?
A: For the last 6/7 years I’ve been writing songs and as a songwriter you’re always trying to get your songs out there to people whether from others cutting your songs or your own projects and I think when our band broke up last year everyone was just ready to do something next and I wasn’t really singing a lot at the time I was writing and playing bass and guitar but never saw myself as a singer and now I’ve just jumped into the deep end, I toured with Jake Quickenden and played some shows with Jake Miller and I just wanted to get on stage and go for it, it’s more about the vibe you have and the energy you have on stage and the performance.

Q: Hollywood Ending achieved pretty impressive stuff in your time as a band, how far do you want to take this and how far do you think you can take this solo project?
A: Hollywood Ending was an amazing experience, a huge learning experience – sorry just I’m on a table and a dead ant just came over with a dead ant and dropped it on the other side of the table and it was amazing, sorry what were we talking about? – We toured America, England, Japan all as an unsigned band and we learnt how to market ourselves and manage ourselves and with this project it’s completely independent and I’m funding myself. I think a prime example of it is the music video, I was working with a very talented videographer mate of mine James Brixton and we worked with some really basic tools but he worked his magic in the post-edit and I’m super proud of what we’ve done considering what we worked with.

Q: To push this further there’ll be more than just single. Any news on what’s coming next?
A: There’s a lot of music, a lot of stuff I wanna put out and I’m so thankful I’ve got fans online and round the world that have stuck around for the last 9 months where I haven’t really done anything other than tweet about what I’ve been doing and I’m stoked to be finally releasing music and I’ve got some really cool visuals to release to promote the song. With the 80s vibes, it’s all super 80’s, from the merch to the video aesthetic we’re just kinda creating this world and I hope people buy into it. I have a lot of music and it’s all different and I kinda like that, it’s not all the same stuff.

Q: Could the right label potentially come along and change your independent status?
A: I’d never say never. If the right person came along that knew what they were doing and they believed in what I was doing I’d definitely hear what they have to say but I’ll always put out music.

Q: Are you looking to tour soon?
A: I’m definitely looking to get back on the road but it’s hard because when you put out a single unless you put out an EP people wanna come to your shows and hear familiar stuff and I haven’t really had time to go back home and nail it live yet. I’m not worried about touring at all I just want it to be perfect.

Q: Is there any message you wanna give it out?
A: I hope people enjoy the music and to anyone doing music just keep writing stuff you wanna write and put it out because if it’s honest material that you’re writing yourself and you believe in it I think people can buy into it and you’ll find a way because there is a way.