MTV UK today announced that consecutive chart toppers, Rudimental, and pop music heavyweight, Jess Glynne, will be heading up the stage at Day One of the biggest music event in the South-West this summer, MTV Crashes Plymouth on July 28th! For a second night of hit performances, Example and Tough Love and more top DJ’s still to be announced, will come together to close the events with a roof raising finale for Club MTV on July 29th!

After the huge success of last year’s MTV Crashes Plymouth, which saw Tinie Tempah, Little Mix and Kodaline whip a crowd of over 30,000 into a pop-frenzy on the sun-drenched Hoe, MTV are back with a double hit of live music from some of the biggest pop stars in the UK.

Rudimental said, “We can’t wait for MTV Crashes Plymouth in July. Who doesn’t love a party next to the sea! See you there!”

Rudimental are Amir Amor, Leon ‘Locksmith’ Rolle, Kesi Dryden and Piers Agget. The BRIT Award-winning, London collective, released their debut album Home in 2013, which went straight to No.1 in the UK Albums Chart and marked them as one of the most successful, genre-defying artists in the UK music scene. Their second album, WE THE GENERATION, also shot straight to No.1 and has catapulted them into international stardom. Currently on a sold outWE THE GENERATION World Tour – including a sold out show at London’s O2 Arena – Rudimental have gone on to sell over a million albums and 10 million singles worldwide, a true testament to how important and relevant this band are.

Plymouth performer, Jess Glynne said, “I’m so happy to be playing MTV Crashes Plymouth! The lineup is wicked, I love the Rudimental boys. It’s going to be awesome and I can’t wait to get down there!”

2015 saw the London born Jess Glynne ascend to the pinnacle of the UK music world. Her double platinum selling #1 debut record, I Cry When I Laugh, was the biggest selling debut album of 2015 and included five #1 singles including the Brit nominated, Hold My Hand, it’s equally successful follow up Don’t Be So Hard On Yourself and current single, Ain’t Got Far To Go. Next week, Jess will perform live at The Brits alongside Adele, Justin Bieber and Rihanna, where she is nominated for three Awards – Best British Breakthrough, Best British Female andBest Single.
Club MTV Performer, Example, said “I can’t wait to be to be performing in front of a massive crowd and looking over the sea! I was there in 2014 and it was an incredible line up and I had an amazing time and I’m really excited to do it all over again!” 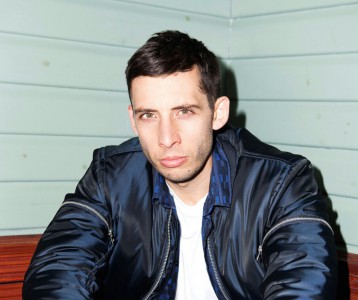 Example first found success with the release of his second studio album, Won’t Go Quietly, which peaked in the Top Ten and subsequently had two Number One singles with Changed The Way You Kissed Me and Stay Awake. Example has since released his fifth studio album,Live Life Living, which charted at Number One in the UK Dance Albums Chart.

Club MTV Performers, Alex and Stefan from Tough Love, said, “Last year’s MTV Crashes at Plymouth looked amazing and we can’t wait to be part of the action this year!”

UK duo, Tough Love, have rapidly risen through the ranks of the house scene since first crossing paths playing the London circuit. Their distinct and recognisable productions, together with energetic and bass-heavy DJ sets, have created a cult following of hardcore fans across the UK and beyond.

Second round tickets go on sale this weekend, Saturday 20th February, atwww.plymouthpavilions.com/ mtvcrashes and are expected to go as quickly as the first so be sure to get in quickly to avoid disappointment.