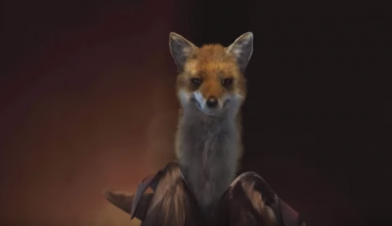 Just in time for Black Friday and Cyber Monday, the biggest shopping days of the year, pop sensation Sia has teamed up with PETA– whose motto reads, in part, that “animals are not ours to wear” – for a riveting computer-generated parody of a fashion show, which shows viewers what it would be like to trade places with the animals who are electrocuted and bludgeoned to death to make coats and other garments.

Set to Sia’s song “Free the Animal”, the campaign, available here, features a seal designer and fox models draped in human flesh and urges, “Take off your skins. Put on your humanity”.

“Cruelty-free vegan fashion is more popular than ever and reflects changing attitudes over killing animals for their skins”, says Sia. “I was happy to lend my song ‘Free the Animal’ to PETA for use in this important PSA.”

Every year, humans cage and kill millions of animals for fashion. Foxes on fur farms in China are kept in tiny cages before being clubbed to death and even skinned alive. Geese have the feathers yanked out of their bodies for down, and cows slated be killed for leather endure extreme crowding and confinement as well as castration, branding, tail-docking and dehorning – all without painkillers. In Canada, seal pups are shot or have their heads bashed in, and in the US, Argentina and Australia – the source of 90 per cent of the world’s merino wool – sheep are cut, kicked and punched by shearers.

The campaign was produced by top ad agency Ogilvy & Mather in Beijing for free for PETA Asia.