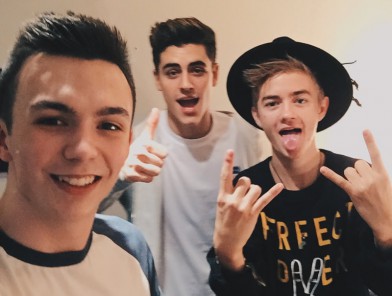 Harry Seaton sat down with hip/pop music sensations and rising stars Jack and Jack just before their sell-out show at O2 Academy Islington. They spoke about the development of their sound, the growth of their worldwide support, their love of the British accent (screaaaaaaaaam) and of course Nando’s.

After quickly selling out their very first UK & Europe headline tour this month, Jack & Jack have announced a new UK tour for April 2016.

19-year-olds Jack Gilinsky and Jack Johnson, known to their combined 20 million social media followers as “Jack & Jack”, have been best friends since kindergarten. Their classroom antics are now lore but they were the spring board for a career only they could have imagined. The summer before their senior year, they began making Vines, and within months, propelled themselves into the hearts of millions of loyal fans. Their first viral Vine, Nerd Vandals, was hailed by the Huffington Post as “the perfect Vine”.

The duo have independently released 11 original singles, with all 11 charting on iTunes and released their debut EP, Calibraska, which immediately rose to #1 on iTunes, and also hit #1 in 14 countries on the Billboard’s Independent Album Chart.

Currently they are in the UK performing their first leg of the tour as well as working on an album for 2016 release.  Later this month, they head to South American for a sold out tour and then follow up with a co-headline tour in Australia and New Zealand with R5!.  At the start of February, they begin their 5 week US Tour which was just announced this week.  They remain true to their original goal of wanting the chance to brighten someone’s day, and have fun doing it.

Watch the interview below: