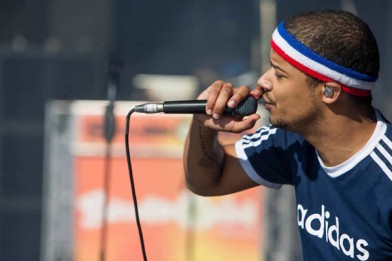 Pop Scoop! settled down with R&B/pop singer-songwriter/actor & all-round Renaissance Man Raleigh Ritchie for a super-chilled chat right before his megawatt set at Sundown Festival. He spoke about his unique journey through music & acting, how he manages to balance the two (no one has ever made it sound so suavely eaaasy!), his songwriting process, (extreme) ideas for music videos, and plans for the future.

2015 has been a breakout year for Raleigh aka Jacob Anderson. From sharing the stage with legendary Run DMC and touring with George Ezra, to the ever-increasing foregrounding of his character Grey Worm in Season 5 of blockbuster TV series “Game of Thrones”, Mr Ritchie has been firing on all cylinders. Following the release of recent single “The Greatest”, he’s tweaked & refashioned the track “Bloodsport” from his 2014 EP “Black and Blue”, with additional string arrangements by Wired Strings guru Rosie Danvers (who has worked with everyone from Kanye West to The Script). This heightened soulful sound is the perfect lead-in to Raleigh’s long-awaited debut album due later this year. Catch him on his UK tour this October – RR’s onstage energy is infectiously boundless!

As part of the interview, Raleigh faced our Quick-Fire Biographical Trivia Questions, with some honest & funny results! And not a word of Valyrian was spoken. . .