Founded 35 years ago, Select has long been established as the UK’s number one model agency and is a major player in the international fashion scene. World renowned for pioneering ‘scouting’, Select Model Management turned the modelling world on its head by getting out on the streets to find natural, individual and unique looks.

Kirsty Reilly, Head of Women’s Special Bookings at Select said, “We are so excited to have signed Charli XCX to Select Model Management. She has such a cool, fashion-forward look and is so different to anyone else we have on our books. We predict huge things for her in 2015 and we can’t wait to start working with her.”

Pop phenomenon, Charli XCX, released her highly-anticipated new album Sucker this week through Asylum Records, firmly establishing herself as one of the year’s hottest breakthrough artists and sought-after pop writers. The 14-track collection of ballsy pop songs is the follow-up to last year’s critically-acclaimed debut album, True Romance. Charli has worked closely with long-time collaborator, Patrik Berger (Lana Del Rey, Robyn), on the new record along with an array of acclaimed associates.

Over the past couple of years, Charli has been named Sesac Writer of the Year, ‘Hitmaker of the Year’ by Billboard, toured the globe with the likes of Coldplay and Ellie Goulding and has sold over 20 million singles worldwide! This month, Charli will release her new single ‘Doing It’ featuring Rita Ora on Feb 8 and is main support to Katy Perry on her European arena tour. She’ll embark on a UK headline tour in March. 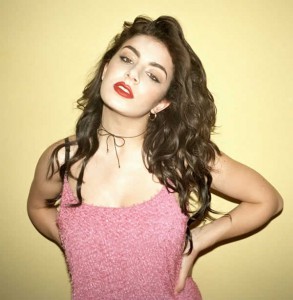