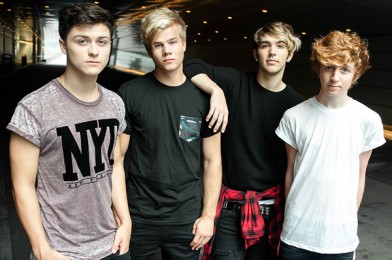 Pop music is about to get dangerous. You may already have seen Hollywood Ending support McBusted on their spring arena tour and British Summer Time extravaganza at Hyde Park. In which case, you’ll be wondering when these hard-rocking guys with mischief in their eyes and a ton of catchy choruses in their hearts will be back in town.

The band even blew away the promoter of the Hyde Park concerts that they asked the band to return the following week to open up for Little Mix and Tom Jones.

Wait no longer, as it’s time for Hollywood Ending to conquer the UK. To coincide with their current UK tour, the guys will release their Punk A$$ Kids EP, a brilliant partying ‘n’ parent-baiting anthem that gives the first taste of a forthcoming album that’ll see Americans Tyler, Cameron and Dan and Brit lad Chris as a major force in pop song writing and production, while leaving a trail of mayhem in their wake.

As well as lead single Punk A$$ Kids, the EP also includes live favourite Girls Girls  – a track about “stuck-up California chicks and how dumb they are”, according to Chris and a rocked up version of the Monkees’s 67 classic, I’m a Believer.  As an additional bonus there’s a stripped back acoustic version of Punk A$$ Kids. The EP is released November 30th.

Quietly making a buzz behind the scenes, bassist Chris Bourne has already written kooky vampire love scorcher Daylight for 5 Seconds Of Summer and is penning songs for McBusted’s new album. Alongside Chris, the four piece comprises singer, guitarist, pianist and all-round musical whizzkid Cameron Byrd who produces the band from his own home studio, joint lead singer and self confessed band flirt Tyler Wilson and Dan Geraghty, also on vocals and guitars.

With the band’s DNA firmly in music (Chris is the younger brother of McBusted legend James Bourne), supporting McBusted made Hollywood Ending dream big. For them the sky is the limit. How they got together is a bit like a movie script too. Hailing from New York (Tyler), Washington DC (Cameron) and Maryland (Dan), the Americans in the band met via mutual friends three years ago. Meanwhile, Chris had just finished college and was advised by James to speak to this crazy pop band his manager had tipped him off about.

Still all aged 19-21, their HollywoodEndingBand YouTube channel has notched up six million views, including for covers of Justin Bieber’s Beauty And The Beat, The Wanted’s Glad You Came and 1D’s Kiss You.

You can safely say that sucking is the one thing an unpredictable band like Hollywood Ending won’t do. As Cameron says: “By this point, we’re super-ready for success.” Parents be warned: these punk ass kids are on the loose.