This new shot at the transformers franchise has gone back to basics, Michael Bay is back directing so expect the Michael Bay way, Lots of action and explosions.

A new hero in the form of Cade Yeager (Mark Wahlberg) enters the fray as an aspiring inventor trying to make his way in the world and trying to do his best by his daughter, Tessa Yeager (Nicole Peltz).  In the first half hour of the movie, we get to know the Yeager’s and how there life has panned out to this point.  We also find out, that to her dad’s disapproval she has got herself a boyfriend in the shape of Shane Dyson (Jack Reynor), who at first does not see eye to eye with Cade!

During this time frame we also meet the bad guy’s for this instalment.  Harold Attinger ( Kelsey Grammer) a crooked C.I.A Agent hell bent on destroying all transformers Autobot or Desepticon!  We also meet the head of his hit squad, James Savoy (Titus Welliver) who is hunting down the robots one by one for reasons, which are made clear later on in the film. 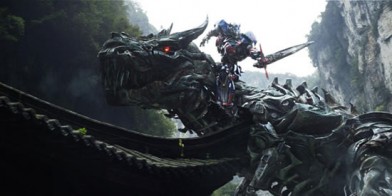 In the next hour we get some of that Bay action, which moves the film on nicely.  After we get our action and explosion fill we have a slight lull in the film.  This is the only bad part of the film, as we get the massage that humans make mistakes and they can sometimes be the best thing that happens to you.  Boring! Get on with the film.

Cut to the Space ship battles and the prison break and the film steps up a notch.  Bringing us to the finale where we see the long awaited dinobots, with Optimus prime laying down the law that he’s the boss and don’t mess.  We see him riding Grimlock (pic above) into battle and the climax of the film.

In conclusion this is a good transformers film, with a slight lull in the middle, that in my opinion didn’t need to be there, which would have made the film shorter.  Fans of the franchise and Michael Bay, will love this film, so in my opinion this is definitely worth a watch!