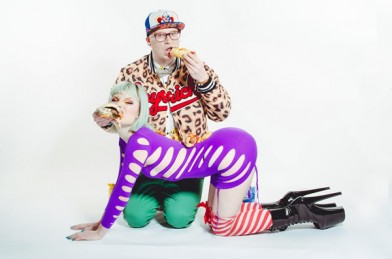 The video out on July 7th was shot in London with creative genius Adam Daniels. Nothing of the video was planned and is instead a voyeuristic view of the band, a POV of Tokyo Taboo. ‘It’s very seedy…There’s a real creepiness to the video…an unsettling feeling throughout with the naughtiness of me playing to the camera lightening the mood.’

London based Tokyo Taboo blasted to earth in 2013 with the release of their pure pop debut EP “Naked” produced in Los Angeles by Adam Moseley (The Cure, Transvison Vamp and Roxette). This visit to the U.S. of A started off their American dream love affair, in particular with L.A., they found themselves playing live at The Viper Room, Whisky a Go Go and then flying onto N.Y.C. to perform at CMJ Music Marathon.