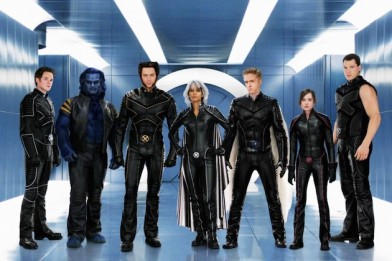 After the incredible success of X-Men: First Class, it was inevitable that Marvel (or more specifically 20th Century Fox) would use the young cast for a sequel. However what we get with days of Future past is a link between the prequel cast and the trilogy cast. This decade spanning story includes espionage, prison breaks, assassinations, Mutants and most importantly, robots with faces that shoot lasers!
SPOLIER ALERT!
The Story
Based loosely on the comic of the same name, the movie opens with an amazing hook for the rest of the movie, showing a desolate and horrible future, in which mutant and humans have been targeted by the terrifying future sentinels. Perhaps the most effective part of this movie is the clear threat posed by the sentinels. The first action sequence sees a few surviving X-Men fighting, and finally falling to the sentinels, however not before Kitty Pryde (Ellen Page) can send someone back to warn them of the impending attack. When these characters meet Professor X (Patrick Stewart), who informs them of the past that led to this point. Bolivar Trask (Peter Dinklage), after the events of the Cuban Missile Crisis (see X-Men: First Class), attempts to create a weapon that can destroy the Mutants. These are the sentinels, large, formidable and a Mutants worst nightmare. Mystique (Jennifer Lawrence), upon hearing of these plans, kills Trask and is captured. Her DNA (being a shape shifter herself) is used to improve the sentinels so they can adapt to a Mutants abilities (for instance when fighting Iceman the sentinel ignites with fire to melt him). Using Kitty’s power, the surviving mutants send wolverine back to the 1970s in order to stop Mystique and stop the war before it ever began.

Cast
The cast in Days of Future Past are proven actors, each reprising their roles as their characters, and for many, for the last time. Evan Peters played Quicksilver, a rebellious teenager with the ability of super speed. His action sequence in the pentagon was a personal highlight, giving the movie a much needed lighter tone. However it needs to be said that just because a character’s name is Quicksilver, doesn’t mean he needs have silver clothes and hair. Peter Dinklage played the role of Bolivar Trask, the villain of the movie. While not having his own fight scene, he still managed to be a formidable foe for the X-Men. Rather than being powerful and strong, he was the strategist, controlling the villainous sentinels from the shadows and sowing the seeds for the forthcoming dystopia that the older Mutants inhabit. James McAvoy and Michael Fassbender both reprieve their roles rather brilliantly as Charles Xavier and Erik Lehnsherr. In my opinion, this is the perfect cast for this movie, as each actor/actress provides the emotional punch it needs.

Special Effects
This movie is visually stunning. The future sentinels are a personal highlight. They look terrifying, which is exactly the look they were going for. Each Mutants power is detailed and exciting to view. Quicksilver’s action scene was exciting and fast paced as he altered the almost frozen world around him to save Charles, Erik and Logan (Hugh Jackman) In fact, there was not a scene in this movie in which I could clearly point out an obvious special effect. Finally, Magneto/Erik lifting the stadium looked incredible, and was also confusing until its purpose was revealed (that I will not spoil).

Gore/Intensity
This movie is riddled with death. In the opening scene a character is literally looting corpses until he finds the X-Men logo on someone. The future is dark place where no character is safe. The sentinels shoot, punch and eviscerate the Mutants in a multitude of ways. People are shot and beat up. The M rating it gets is well deserved. The sentinels, as stated multiple times, are truly terrifying, and while the movie is not as death heavy as some movies, perhaps this instalment in the X-Men franchise is better left to the adult fans of the series rather than the kids.

Comments
These are some general things I would like to mention
– This movie was not as wolverine heavy as I originally expected, shifting focus, like First Class, on Charles and Erik’s past.
– The fight scenes in the future where Blink (Fan Bingbing) creates portals to stop the sentinels were especially incredible to watch.
– Seeing young and old Charles interact was an interesting way to progress the story.
– Peter Dinklage never fails to impress, whether it’s as Bolivar Trask or Tyrion Lannister (Game of Thrones)

The After Credits Scene
The after credits scene might confuse those uninitiated into the expanded X-Men universe, so let me explain. The figure we see assembling the pyramids in Ancient Egypt was Apocalypse. Due to licencing issues this will not be the storyline followed by the next movie (X-Men Apocalypse), but this is the story known to us in the comics. One of Reid Richards’s descendants (Reid Richards is better known as Mr Fantastic from the Fantastic four) discovers time travel, and rather than live as a middle class in the utopian society he inhabits, he decides to rule as a god in Ancient Egypt. He becomes King Rama-Tut, ruling with his superior weapons. During Rama-Tut’s reign, Apocalypse is born. Apocalypse is a mutant with an endless list of powers, who wastes no time in killing Rama-Tut and taking his throne and technology. Becoming part mutant part machine he rules with an iron fist. He finds a crashed Celestial (hyper advanced race of aliens who act as the demigods of the marvel universe) ship, in which he finds even more advanced technology to improve his arsenal. He also travels with his four horsemen (the mythological signals of the coming apocalypse) named War, Death, Pestilence and Famine. Multiple characters from the Marvel universe have assumed different roles over the years, a personal favourite of which is The Hulk as War. The conflict for the 2016 sequel will follow the younger cast of X-Men as they band together to stop Apocalypse, who has brainwashed or convinced some of the main characters to become one of the four horsemen (if I am not mistaken Wolverine was Death for a time). It is unclear how Apocalypse has awakened, but a common theory is that the timeline altering in Days of Future Past has done just that. I guess all will be revealed in 2016.

Verdict
When I first heard there was an X-Men movie with time travel in it, I was on board. The fact Days of Future past has surpassed my loft expectations is a testament to the actor’s abilities to work with a sometimes convoluted script. The action is great. The time travel element is great. The villains are scary and formidable. The climax is exciting and dramatic. But please change Quicksilver’s outfit!
I would rate this movie 8.5/10