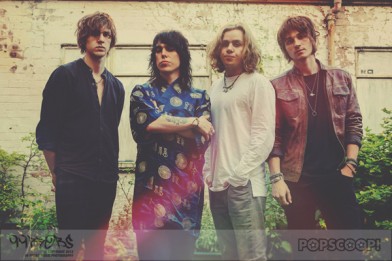 It is often said that rock bands just aren’t what they used to be. Gone are the commitment, passion, energy and effortless style of those greats from the 1960s, 70s and 80s. . . Well, a rebirth is now upon us. All hail glam indie rock ‘n’ rollers The Struts!

Derby-based four-piece band The Struts are Luke Spiller (lead vocals), Adam Slack (guitar), Jed Elliott (bass) and Gethin Davies (drums). True to their name, they embody a bold, brash and bravura counterpoint to an increasingly over-calculated and lackluster rock scene – combining the best elements of both past and present acts into a distinctly modern creation: “We’ve got the swagger of The Rolling Stones, the sophistication of Queen, the pop mentality of The Vaccines and the glamorous attitude of T. Rex.”

With the recent release of fourth single “Put Your Money On Me”, their debut full-length album “Everybody Wants” due July 28th, a UK headline and festival tour in progress, and a jaw-drop slot supporting The Rolling Stones’ “14 On Fire Tour” at Stade de France in Paris on June 13th (sold out capacity: 81,000), this year is set to be one helluva step forward in The Struts’ inevitable global overthrow!

Pop Scoop! sat down to have an in-depth conversation with The Struts right before their recent gig at Norwich Arts Centre. They spoke about their musical style, sound and image, their dynamics as a band, life on the road, their ongoing interest in covers, the role of social media for them, and the overriding importance of unadulterated joy in performing. In addition, The Struts faced our Quick-Fire Biographical Trivia Questions – with some humorous results!

Check out our The Struts gallery from the interview and gig  thanks to our partner 99Probs: