Following their Final tour, Fusion Festival today confirmed that The Wanted will play on the Sunday night of Fusion Festival, it’ll be a poignant and spectacular moment for their fans and the band themselves. Other acts added to the bill today are The Vamps, Pixie Lott, Ella Henderson, Becky Hill and Ollie Marland.

No less than 20 of today’s biggest pop acts will descend on Birmingham’s Cofton Park to play over two nights, with up to 40,000 music fans coming together for a huge weekend of pop at its very best. Expect spectacular live performances, massive chart smash hits plus all the fun of a festival fair with a full fairground and many other interactive events.

Added to Saturday’s bill, band sensation The Vamps who caused a stir last year with their debut single ‘Can We Dance’ and repeated the success since with ‘Wild Heart’ and ‘Last Night’ from their debut album. Joining the guys is X Factor starlet Ella Henderson who is set to release her stunning debut single ‘Ghost’ next month and Becky Hill, who is best known for featuring on Rudimental’s acclaimed debut #1 album on their single ‘Powerless’ and is now gaining recognition in her own right. 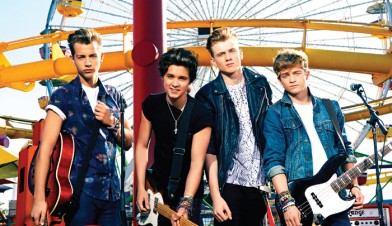 Sunday just got even more exciting with the announcement of The Wanted  playing their only summer festival show. Joining them is #1 selling pop starlet Pixie Lott who has topped the charts with singles ‘Mama Do’ and ‘All About Tonight’ and is set to release her third studio album in August and Ollie Marland who recently signed a management contract with the force behind stars such as Ellie Goulding, Jessie J and Union J and is a guaranteed ‘one to watch’, rounding off what is set to be an incredible weekend at Cofton Park.

Fusion Festival is proud to support The Prince’s Trust, with £5 from each ticket sale donated to the charity to help change young lives across the UK. The Prince’s Trust is a youth charity that helps vulnerable young people to turn their lives around.

4Music is the official broadcast partner for Fusion Festival’s second annual weekend music event and will air the concert as part of its summer festival coverage.

Airing in August, 4Music’s highlight coverage will include interviews, backstage footage and live performances from the likes of Jessie J, Pitbull and Union J.

The two-day festival, will also get extra exposure across 4music.com, 4Music social channels and The Box+ app.