As promised. We at Pop Scoop! are giving ONE lucky fan the opportunity to WIN this priceless one-of-a-kind signed 5 Seconds Of Summer doodled canvas.

And the two winner of a one-of-a-kind signed 5SOS doodled canvas and pens is….

You’ll not only get the canvas, we are throwing in the pens used by the boys and untouched by anyone else. And you can see were they have been from the photo below, Eeek! 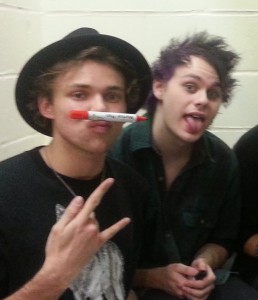 And if that’s not enough. Our photographer Lee Blanchflower of 99Probs will give the winner a framed printed copy of the photo with the boys proudly holding their artwork. (see pic at top).

RT: I followed @pop_scoop to be in with a chance to WIN a signed 5SOS doodled canvas and pens. http://goo.gl/cJMiZE #5SOSPopScoop

You can enter more than once but please respect your followers and refrain from flooding their streams.

• There is ONE prize (the “Prize”) on offer consisting of a signed 5SOS doodled canvas, the pens used to draw with and a framed photo of 5SOS posing with their artwork.