WATCH: 5 Seconds Of Summer music video for ‘She Looks So Perfect’ 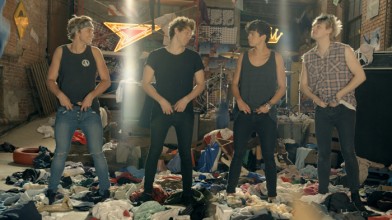 5 Seconds Of Summer have unveiled the video to their debut UK single, ‘She Looks So Perfect’ and it just makes you want to get your kit off.

And we’re not the only ones who feel that way. Jake Sinclair who co-wrote and produced the song went down to the shoot in LA to say hi to the guys, ended up in the final scene naked throwing his clothes at them from the balcony.

There’s no doubt  5 Seconds Of Summer have the winning formula when it comes to success. Within hours of the pre-order going live it was Number 1 in the UK iTunes album chart (and 22 other countries), in the iTunes Top 10 in 33 countries and the single was Number 15 in the UK  iTunes single chart, all before anyone had heard a single note.

‘She Looks So Perfect’  will be out on March 23rd. Pre order below: