A commanding voice is amplified and funnelled through our ear holes or for all you brain boxes out there “meatus acusticus externus”. As the bass drops it shivers the mucus down my throat, bounces off my chest and wobbles down my spine, to the point of crumble.

Now Itch performs with a DJ/Vocalists who he often calls “the child prodigy” as he wears a latex mask of a crying baby….. and that’s really really weird but you know what… I kinda dig it. And if it’s wrong, well I don’t wanna be right.

He commands the audience with more authority than you can shake a stick at as if he’s the messiah come to save us from a Britain without equality and rising up to fight back and we, his disciples are hanging desperately on the end of his tongue and the ones that aren’t, are too busy making petrol bombs. He is very much a rarity in rap/hip-hop. To have that much control over a rowdy, rabble of hormonal adolescences, with an unrighteous amount of WKD pumping through their veins is not something to be sniffed at.

Itch performed a half hour set with songs off his debut album “The Deep End” that is released on the 24th march this year. Songs included “homeless romantic” and “Children of the Revolution” which were both better than the recordings. And the recordings are by no means bad they are excellent but he really upped his game with sizzling vocals to homeless romantic and the added accents to children of the revolution to put to shame even the most accomplished impressionist. 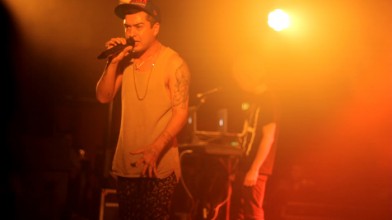 He knows how to make a real impact with a smooth calm suddenly blown to oblivion with a real intense anger and it really hits you like a sheet of ice cracking ribs. This was well received by the audience and when he jumped the barrier and into the crowd he was welcomed by embracing arms.

My only wish is that he performed “Diplomat” and “London is Burning” however these were off his EP “Manifesto” parts 1 & 2. But I urge you to listen to manifesto which is free to download from his website and to see his live performances. If you are into rap/hip-hop he will leave you, perhaps enlightened and if your not maybe you’ll be converted?

As quick as he came he went….

“I know it sounds weird, I do want you to look back on this and smile. But…. I kinda want that smile to be through tears”

Que Dub Step. The sweaty little venue we all know and call “The Waterfront” suddenly transformed into a circus. Dan le sac Vs Scroobius pip were the ring masters and we the animals that beaten to stand tall on hind legs. And we did as they commanded. When they commanded us to bounce, we did and when they asked us to get rowdy, once again we did as they asked.

With enough bass to reduce our brains to a kind of mushy pulp, courtesy of sidekick “Dan le sac” Pip was not out of a job. He injected intelligent and witty lyrics such as “Such little food for thought my fucking brain feels anorexic. So many typos when I write, oh, I’ll claim I’m dyslexic.” Sound very off the cuff and spontaneous. However once you realise what Pip is actually getting at you quickly understand that this guy has conducted an in depth analysis of his own mind, feelings and what is going on in the world around him.

The performance was very professional but also extremely hilarious. You can see the bond between Dan and Pip really shine when they embark on making funny one liners to the crowd, its almost hanging out with your best mates.

Despite a couple of self proclaimed cocks-ups on le sacs part, he managed to flip it on to its head into a 10 second comedic stand up.

The song everyone was waiting for “Thou Shalt Always Kill” and to everyones pleasure they played it. And of course the crowd joined in on the lyric “just a band!” for a bit of call and response.

They emigrate from the stage on the last line which is “Thou shalt always, thou shalt always kill” leaving us with a stone sour taste on our tongues. The return back to the stage for 2 last numbers including “introdiction” which is better live, the last song was accompanied by a huge Dub Step solo by Da le sac, and a terrified Godzilla returns to the Pacific once again.