GALLERY: One Direction – Midnight Memories behind the scenes video shots 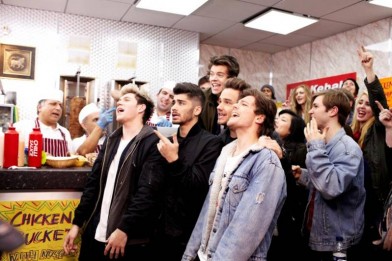 ‘Midnight Memories’ sees the boys taking on a much greater creative role than before, co-writing 10 of its 14 tracks in a process all have agreed felt more organic. The arena rock title track was one of the first written for the new record, with the boys and the team of Jamie Scott, John Ryan and Julian Bunetta. The same team came together for current single ‘Story Of My Life’, the upbeat, 80s-inspired ‘Diana’, the anthemic ‘Strong’ and the sparse, emotive ballad ‘You & I.’

The punchy, rollicking ‘Happily’ reunites the band with hit makers Savan Kotecha and Carl Falk, part of the team behind ‘What Makes You Beautiful.’ One Direction were also able to write and record with some of contemporary pop’s finest names. ‘Don’t Forget Where You Belong’ saw the boys once again team up with their heroes McFly – Tom Fletcher, Danny Jones and Dougie Poynter co-writing this tribute to a life spent always on the road. Jacknife Lee and Snow Patrol’s Gary Lightbody co-write the killer pop-rock of ‘Something Great’, while OneRepublic’s Ryan Tedder spent time with the band to create ‘Right Now.’

‘Midnight Memories’ sees One Direction growing up and putting their own emotions and experiences into their music – and the result is their most complete, mature and personal album to date.

Niall Horan, Zayn Malik, Liam Payne, Harry Styles and Louis Tomlinson formed in 2010 and have since gone on to success and fame all across the globe. They’ve sold over 32 million records and notched up 61 number ones.

So far 2013 has seen One Direction play over 100 shows in 21 countries on their first ever world tour. In February they visited Ghana with Comic Relief and recorded the official 2013 Red Nose Day charity single, ‘One Way Or Another (Teenage Kicks).’ That month they also won a BRIT Award for Global Success, and in August this year ‘Best Song Ever’ was awarded ‘Song Of The Summer’ at the MTV VMAs.

Last week One Direction made their cinema debut with their massive hit 3D concert movie and documentary ‘One Direction: This Is Us.’ The film has been a phenomenal success, topping the UK and US box offices, and grossing an incredible $18.4 million on its opening weekend in the US alone.

Following on from the release of ‘Midnight Memories’, One Direction have already announced the first leg of a huge worldwide stadium tour for 2014, including two nights at Wembley Stadium.

some behind the scenes photos from the video shoot of One Direction’s new single ‘Midnight Memories’: