It takes a generous pinch of pixie dust these days for an EDM act to stand out amongst the madding crowd. In order to succeed, both sound and look must cohere into a recognisably fresh brand. Forget “Rosebud”, all rise for The New Citizen Kane!

The New Citizen Kane is the music project of multi-talented singer/songwriter, producer, model and actor Kane Luke. With a performing arts school background, a university degree in Music Production, and experience in fashion label brand management, Kane was ideally equipped to combine music and image into a winning formula, marrying his unique ideas with the creative input of his many collaborators.

While Kane’s first love were soul/R&B artists such as Stevie Wonder, Mariah Carey and George Michael, his growing interest in electronic acts like Groove Armada and Moloko, led to work in dance music in the late 00s. Deep House collaborations with DJ Aron VS The Sample Guys, Barrique and Mowree were all international club hits, as was the Ara & Becka Vocal Mix of his first solo single “Spun Like Sugar”.

Following a number of live appearances last summer including sets at Secret Garden Party and Summer Rites festivals in the UK, The New Citizen Kane has two follow-up singles ready to drop (“Hearts Aren’t Made of Wood” and “Remedy”) as well as full-length album “It’s Not Science. . . It’s A Feeling” nearly complete. 2014 is thus surely set to be NCK’s breakout year!

Pop Scoop! caught up with The New Citizen Kane recently for an in-depth chat via telephone. He spoke about the origins of the new project, his musical style and its place in the EDM genre, his songwriting process, the contrast between studio work and live performance, his debut single and its video, his unique fashion look, and what’s coming up next for him. 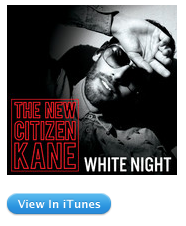